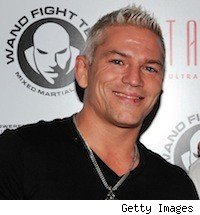 John Gunderson remembers very clearly the first time he met Shawn Tompkins. He was fighting at an IFL event in 2007 and Tompkins was sitting ringside. Though he was then a coach for the IFL's Los Angeles-based team, Tompkins wasn't cornering anyone that night, Gunderson recalled. He was only a spectator, at least in theory.

"He ended up kind of coaching me along all during the fight," Gunderson said. "Afterward he came up to me in the back and told me he'd like to work with me. That kind of stuck in my mind for about six months, and that's when I decided to move to Las Vegas. I moved out to Las Vegas specifically to train with him."

Talk to enough fighters in the Las Vegas MMA scene and you'll hear similar stories over and over again. Tompkins was the guy who saw something in them. He was the one who gave them a place to train, a place to sleep, a surrogate home on holidays spent far from their families.

After attending an MMA event on Saturday night in Ontario, Canada, according to reports, Tompkins went to bed and never woke up. He died of an apparent heart attack, according to brother-in-law Sam Stout. He was 37 years old.


More: Shawn Tompkins Dies at 37 | Stout: Heart Attack Was Cause

By the time the news got back to Las Vegas, where Tompkins and wife Emilie had lived for the past several years, the shock washed over everyone who knew him.

Tompkins rose to prominence as an MMA trainer when he worked as an assistant coach for the IFL's Los Angeles Anacondas. Initially, the team was fronted by MMA legend Bas Rutten, who brought Tompkins on to help with striking training. But as Rutten moved into a full-time color commentary role for the IFL, he chose Tompkins to succeed him as head coach.

In the IFL days, Rutten used to tell the story of how he met Tompkins years earlier at a seminar. At first Tompkins struck him as just another "party boy," Rutten said, but when he traveled to Los Angeles to train with Rutten and was willing to sleep on the mats in the gym just for a chance to learn from one of the greats, Rutten began to realize that maybe his first impression was misguided.

Rutten wrote on his Twitter on Sunday that Tompkins had texted him just a day earlier "telling me he loved me, so, thank God, I called him to tell him it was mutual."

Benji Radach, who fought for Tompkins when he took over the IFL squad from Rutten, remembered him as a coach who was passionate about the sport, but also fun to be around outside the gym.

"He was a lot like Bas, actually," Radach said. "He liked to screw around and have fun, but when it came time to get down to business he was serious and all about hardcore training. It was some of the hardest practices you could be in. ... He loved the sport. The thing about Shawn, he could goof off, be a fun dude, but he loved the sport and he made it his life."

UFC welterweight Mike Pyle, who worked with Tompkins when he was a coach at the Xtreme Couture gym in Las Vegas, said it was Tompkins' sense of humor he'd remember most.

"He was a funny guy, man. He could really make you laugh."

At the same time, Pyle said, he was committed to his fighters -- especially the core three who he brought up through the ranks.

"He was so dedicated to the sport, dedicated to his guys, and he brought up some studs from young ages with Chris Horodecki, Sam Stout, and [Mark] Hominick. He developed some great fighters in those three."

It was Horodecki, Stout, and Hominick who were always the most closely associated with Tompkins, regardless of what gym he was working out of at any given time. Tompkins was married to Stout's sister, and had brought Horodecki along since he was a teenager who had to lie about his age to enter kickboxing tournaments.

Though all three have dealt sparingly with the media since news of their mentor's death, they're the core contingent that's been hit hardest by the news, said Gunderson.

"I was close with him, but not like those guys," Gunderson said. "They were like his little brothers."

But given the way fighters in the Vegas scene typically hop from one gym to the next to get all their training needs met, Xtreme Couture coach Joey Varner said there is hardly a pro fighter in all of Sin City who hadn't benefited from Tompkins' expertise at one point or another.

"I mean, literally. Every single guy at [Xtreme] Couture's -- from Randy [Couture] to Vitor [Belfort] to Ray Sefo to Gray Maynard to Jay [Hieron] -- guys at the other gyms in town, every single person here has worked with him or had some relationship with him."

The fact that Tompkins touched so many lives is why the loss is so devastating to the entire Las Vegas fight community, said Varner, who was instrumental in bringing Tompkins to Couture's gym in the first place.

"It's really just one of those holy s--t moments in life. You expect to see someone around, and they become this fixture, part of the scene, part of life, and then suddenly you remove that piece and it's just this big huge void that everyone can't help but stare at."

For the fighters who worked with him, like Gunderson, the techniques and skills he imparted seem secondary now, almost like a byproduct of being around him. What they remember more is his generosity of spirit, like the time he traveled with Gunderson for a fight in Abu Dhabi, and raised no objection about sleeping on the floor of the hotel room all week.

"He was just very giving like that. Or you'd go into the gym and he'd be holding mitts for guys, four or five rounds a guy and there'd be five or six guys lined up. They weren't paying him to do it, either. He did it because he loved it and wanted to see them become better fighters. That was Shawn. If you needed a sparring partner, he'd strap up and spar with you. That's just how he was. He could get four hours of sleep, but he'd still be there in the morning working with guys."

Sure, he had his run-ins and his falling outs, Gunderson said, but who doesn't in this business? He was no saint, and didn't claim to be. One thing people knew and could count on was that Tompkins was a coach who dedicated his life to his fighters. Whether they needed someone to help them perfect their left hook or they needed a couch to sleep on, Tompkins gave them everything he had.

"Words can't even describe how terrible it is," said Gunderson. "You never expect something like this. That's life though, right? It comes and goes so fast."