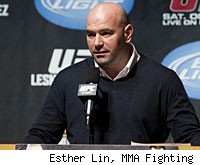 The UFC may finally be getting its long-awaited, highly anticipated broadcast television deal.

Sports Business Journal is reporting that the UFC and Fox have agreed to a multi-year deal that would put as many as four events a year on the Fox network, plus Fight Night shows and The Ultimate Fighter on Fox's sister cable channel, FX. The deal is reportedly worth $90 million a year to the UFC and will last seven or eight years.

Spike TV and Versus both have contracts with the UFC that expire at the end of 2011, and this agreement likely means neither channel will continue to do business with the UFC going forward.

The biggest question for the UFC is what kind of fight cards it will put on Fox. Getting on network TV has long been a goal of the UFC's, and once that goal is accomplished the UFC wants to do it right, with big fights that will attract big audiences. However, the UFC's primary source of revenue is pay-per-view, and $90 million a year from Fox isn't enough to change that. The UFC will have to carefully balance the need to fill its network cards with big fights and the need to keep demand for pay-per-view shows high.

But if it's done right, this can be a major step forward for the UFC, which is continuing to fight for mainstream acceptance. Network television puts the UFC in more households than ever, and will give the UFC the aura of a sport that can't be ignored by the mainstream sports media. The Fox deal has the potential to be one of the biggest deals the UFC has ever made.