MMA Top 10 Lightweights: Who Deserves the Next Shot? 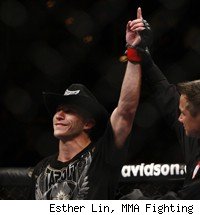 The UFC's lightweight division is such a shark tank that it's incredible that Jim Miller won seven fights in a row against 155-pounders in the Octagon, and won all of them convincingly. Even if you're not fighting the cream of the crop, you're going to run into trouble at some point when you're fighting UFC lightweights.

Trouble is just what Miller ran into at UFC on Versus 5, when Ben Henderson hammered him for three rounds on the way to a unanimous decision victory. The Henderson fight was Miller's chance to earn the next shot at the lightweight title, but instead he gets dropped in the rankings, and it's back to the drawing board for the UFC, which needs to figure out who's next for the winner of the upcoming Frankie Edgar-Gray Maynard fight.

So who will it be? We take a look at some of the contenders as we rank the Top 10 lightweights in MMA below.

1. Frankie Edgar (1): The lightweight champion defends his title against Gray Maynard at UFC 136, and one way or the other, we can all hope for a decisive ending so that some new blood can fight for the lightweight strap.

2. Gray Maynard (2): One of the frustrating things about the lightweight division is that we're going to go two full years with only three men competing for the belt: First Edgar beat B.J. Penn, then he beat Penn in the rematch, then Maynard and Edgar fought to a draw, and now they're preparing for a rematch. There's a long line of good lightweights waiting for a title shot.

3. Gilbert Melendez (3): Unfortunately for Melendez, he's still stuck with Strikeforce, defending his belt against Jorge Masvidal next. Masvidal is a fine fighter, but he's a step down for Melendez. The sooner Melendez is in the UFC, the better.

4. Clay Guida (6): Edgar, Maynard and Melendez are pretty well established as the Top 3 in the world, but watching the Ben Henderson-Jim Miller fight had me re-assessing the rest of the lightweight division, which is a big jumble of good fighters who are hard to separate from each other. I settled on Guida as the next-best of the bunch because of his current four-fight winning streak, in which he has looked particularly dominant, and especially for his impressive win over Anthony Pettis, who in turn had an impressive win over Henderson. If Kenny Florian or Diego Sanchez were still in the lightweight division, I'd rank either one of them ahead of Guida, as they both beat Guida before his current four-fight streak began. But as it is, I have Guida next in line at lightweight, and probably next in line for a title fight.

5. Anthony Pettis (9): The further we get into the world of the post-UFC-WEC merger, the more impressive it seems that Pettis was the WEC's lightweight champion. When Pettis beat Henderson to win the WEC lightweight belt, we didn't know that Henderson was capable of beating a Top 10 UFC lightweight like Miller. Now that we do know, it's reasonable to re-assess Pettis's standing in the lightweight division, and that's what I've done in moving him into the Top 5.

6. Ben Henderson (NR): The best thing about Henderson as a fighter? His physical strength, especially in his lower body. He uses those tree trunk thighs to drive right through his opponents, and he completely overpowered Miller -- something no one has ever done before.

7. Shinya Aoki (4): Aoki is going to have a tough time staying up high in the lightweight rankings if he doesn't start beating higher-quality competition. The two guys he's beaten this year, Rich Clementi and Lyle Beerbohm, are fine, but they're nowhere near the level of opponents he'd be fighting in the UFC. I still think Aoki is a Top 10 lightweight, but I wish I could see him prove it in the Octagon.

8. Melvin Guillard (8): Guillard is currently on a five-fight winning streak, and if he makes it six in a row against Joe Lauzon at UFC 136, he'd have a good chance of earning the next shot at the Edgar-Maynard winner. It's hard to believe now that Guillard was once viewed as an example of a guy who had thrown away his talent: Now he's 7-1 since making his UFC return three years ago, and on the verge of a title fight.

9. Jim Miller (5): Miller is a great jiu jitsu practitioner who's always looking for a submission, but what he found against Henderson is that he just wasn't strong enough to deal with a bigger man pounding away at him from the top. He might want to consider a move to featherweight.

10. Eddie Alvarez (7): The longer Alvarez goes without fighting significant competition, the harder it's going to be for him to stay in the lightweight Top 10. Alvarez is 7-0 since signing with Bellator, which is impressive, but none of his seven opponents is even close to the Top 10. And the last time he did face a Top 10 opponent, Shinya Aoki, he was submitted in 92 seconds. I'd love to see Bellator put Alvarez in the cage with someone who can really let him prove that he's one of the MMA elite, but the reality is that won't happen any time soon.