Marloes Coenen: I Would Love to Return to Strikeforce 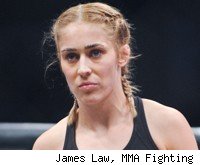 Former Strikeforce champion Marloes Coenen holds no ill will towards Zuffa for releasing her following her title loss to Miesha Tate, stating Tuesday she would more than welcome a return to Strikeforce.

"I would love to fight for Strikeforce," Coenen said on The MMA Hour. "They've always treated me well."

And although she may disagree with her release, Coenen says she can understand it.

"I've been in this game since I was a teenager," she said. "So I know how it works and it's business. It really is a business and when we renegotiate, things can go hard."

First, it was Alistair Overeem who was said to be released from Strikeforce. Shortly after, Coenen and her Golden Glory teammates Jon Olav Einemo and Valentijn Overeem were conveniently cut. It's highly unusual for a fighter coming off a title loss like Coenen to be cut from the roster, but it's believed to be because of her loyalty to Golden Glory management, a group currently in negotiations with Zuffa for Alistair Overeem's services.

Even though Coenen can analyze the situation presently without taking it to heart, it's not to say she wasn't devastated with the news of her release. Coenen said it was "a little bit too much" for her when she was informed of her new free agent status.

Considered to hold the submission advantage against Tate, Coenen tapped out to an arm-triangle choke, a hold she routinely escapes from during training. Coenen took the loss hard, playing the fight over and over in her head and considering how she might not be in her current predicament had she retained her title.

"I just lost, I was very emotional about that," she said. "I had been dieting for two months, I had been training and training my butt off and then I lose. If I had not lost, then I would not have been cut."

UFC president Dana White explained the releases by saying the UFC does not follow Golden Glory's alleged demand to have the promotion pay the management instead of the fighter. That was clearly not the case though, as Coenen sent out a photo of her check made out in her name.

"I think Dana was misinformed because he wasn't running the day-to-day activities and I think somebody told him wrong," Coenen said. "He's the spokesperson of the UFC and I think that's what happened."

Coenen, who considers both the Golden Glory management and stable as family, had no issue with showing her check to the public and possibly ruffling a few feathers with Zuffa.

"It's my family and if you diss my family, then I will stand up [for them]," she said with a chuckle.

Coenen will have to wait and see if Golden Glory and Zuffa can come to terms for a new deal with Overeem and what that means for her and her team. For now, Coenen is talking to several promotions for a possible fight before the end of the year.