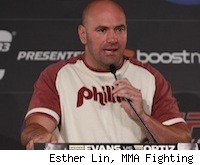 A rumored agreement between the UFC and FOX that would see mixed martial arts' biggest promotion broadcast on network television for the first time has yet to be confirmed by either party. Sports Business Daily first reported the deal on Tuesday morning. Hours later, UFC president Dana White would not comment on the story's accuracy.

"I didn't comment when The Wall Street Journal said we bought G4 either," White said at a press conference in Houston for UFC 136. "When you're in these negotiations, rumors start flying and everything else."

Except that's not entirely accurate.

First off, the Wall Street Journal in June reported that the UFC was in talks to buy G4, not that a deal was done. (The New York Times also reported on the possibility.) Secondly, White did in fact comment on the report. As a matter of fact, he addressed it the day after it first made the news, saying, "It actually blew my mind that huge media sources would go out and announce that when there is no deal. It's strange. It's crazy."

At the time, White did go on to say that it was "stupid" for him to discuss it in the media while negotiations were ongoing.

But on Tuesday, White voiced at least a desire to end up just where the SBJ report had him landing, on broadcast TV.

"I think it's time," he said. "I think we do fit into the sports world with the NFL, Major League Baseball, the NBA, etc. And I've always said that what would take it to the next level is a broadcast deal, being on one of the major networks. But to do that, you have to have the right deal."

Whether the rumored multi-year-, $90-million per year FOX deal is the right one is the question. For now, there's no confirmation coming from him. But other possibilities don't appear as rosy. MMA Fighting sources have continually said that a new deal with Spike is a remote possibility, and that talks with NBC/Versus stalled over the last two weeks. The certainly leaves FOX as the likely landing spot. Now, we just wait for confirmation.

"There's been other organizations that have popped up and jumped on the first network deal they could get," White said. "But if the deal doesn't make sense, you're going to go out of business real quick. We've been very smart. We've taken our time and built this thing slowly just like you do any other business, no matter what carrots were dangling out in front of us. We're in this thing for the long haul. Not to make [quick] money. We're in for the long haul. We got into this because we love the sport, we're passionate about it. And what we want to do is build a sport. For me, building a sport is where everybody all over the world plays by the same rules. That's our goal, that's what we're working on, and when the right deal comes, we'll take it."