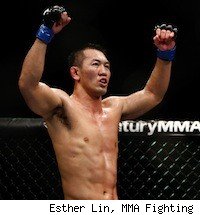 UFC President Dana White is fond of saying that the only way to prove you're the best fighter in the world is to do it in the UFC. It's not that there aren't any good fighters in other promotions, White believes, it's just that the only fighters who consistently test themselves against the best in the world are the ones who do it inside the Octagon.

By that rationale, White says Yushin Okami -- who will fight Anderson Silva for the UFC middleweight title at UFC 134 -- is the greatest Japanese fighter in MMA history.

"In my opinion, Yushin Okami is the best fighter ever to come out of Japan," White said. "This guy didn't fight cans and get this built-up, mythological record."

Fighters who fight "cans" and build up a "mythological record" are a constant thorn in the side of White, who regularly complains about fans and members of the media who proclaim Fedor Emelianenko -- whose best moments came in Japan, and who never fought in the UFC -- as the greatest fighter in history. White always insists that Silva is the best ever, and now that he's promoting Silva against Okami, he's talking up Okami as the best ever to come out of Japan.

A lot of longtime fans of Japanese MMA -- especially the fans from the Pride days -- would disagree. Kazushi Sakuraba, Takanori Gomi, Kid Yamamoto, Hayoto Sakurai, Caol Uno and Shinya Aoki could all make a case that they've accomplished more in mixed martial arts than Okami has.

White is right, however, that none of those fighters have proven it in the Octagon. Aoki has never fought in the UFC. Sakuraba and Sakurai each fought in the UFC just once, with Sakuraba fighting on the UFC's Japan card in 1997, and Sakurai losing to Matt Hughes in 2002. Gomi and Yamamoto are both currently under contract to the UFC, but both were past their prime before they ever appeared inside the Octagon. Uno had some success in the UFC and fought twice for the UFC lightweight title, but his overall record in the UFC was just 3-5-2.

And White is surely right that if Okami beats Silva -- a very big "if" -- he would have an excellent case that he's the best fighter ever to come out of Japan. Okami has already beaten Silva once, although that was a controversial disqualification. If Okami were to beat Silva convincingly, that would become the signature win of his career and completely transform his reputation, while simultaneously knocking Silva from the top of the pound-for-pound rankings.

For Okami, White believes, a win over Silva would make it impossible for anyone to deny that he's the greatest fighter ever to come out of Japan.

"If he wins this fight," White said, "he'll get the credit he finally deserves."