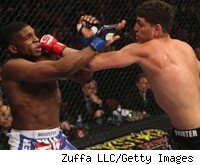 In just over one week, Nick Diaz officially starts camp to train for his UFC welterweight championship opportunity against Georges St-Pierre. Diaz will do so surrounded by his usual partners at Team Cesar Gracie. But he'll also have the benefit of sparring with one of the world's best boxers. For the duration of his camp, he'll be spending time in the squared circle with super middleweight Andre Ward.

Ward is currently the WBA champion in his division and slotted at No. 9 on Ring Magazine's pound-for-pound world rankings.

In an interview with MMA Fighting, Gracie explained that the training sessions will benefit Diaz not only in his boxing skills but also by preparing him for one of St-Pierre's most underrated weapons: his speed.

"Andre is very quick and athletic," Gracie said. "GSP is an athletic guy. I don't think he's the best boxer in the world, but he's fast and quick out there. To get used to a guy like Andre Ward, GSP wont be really that big of a threat speed-wise if Nick gets used to Andre."

Diaz and Ward have known each other for about 10 years, when a then-teenaged Ward would visit Gracie's gym to box and he and Diaz would spar. While the two have worked together many times in the past and are friends, this marks the first time they will train together throughout an entire camp.

Like Diaz, Ward has a fight scheduled for October 29. He'll face the UK's Carl Froch in the finals of the Super Six boxing classic in Atlantic City, New Jersey. Meanwhile, Diaz faces St-Pierre 2,500 miles away in Las Vegas.

Diaz has won 10 straight fights dating back to May 2008. Once considered a light puncher, Diaz has finished six of those wins by TKO. He also has three submissions and one decision. In his last fight, he finished British striker Paul Daley via strikes in a fight-fire-with-fire kind of performance.

Of course, St-Pierre is known for much more than his striking, often using his wrestling to control and batter his opponents. Gracie said Diaz (25-7, 1 no contest) will also be importing wrestlers into his camp to prepare for that, but he added that they are not going to be overly concerned with getting into a tactical battle for where the fight takes place.

"The best thing for Nick to do is really not to try to necessarily stop that, and not care where it's going to go," he said. "It's on the ground? We'll fight on the ground. It's standing up? We'll fight standing up. Seriously, it's like, don't worry about it. A lot of people try to stop that and get in the game of who the more explosive athlete is. I don't think that's where we want to go."

About two-and-a-half months away from a fight he lobbied for, Diaz has his camp set and his goal ahead of him. Asked about Diaz's mindset this far out, Gracie said he is simply focused on the task at hand. He's always wanted to prove he's the best welterweight in the world, and there's not much more to say until he gets the job done. Is he anxious? Excited? Nope. He's just Nick being Nick.

"You can't really notice a difference with Nick," he said. "I don't think 'excitement' is a word he uses in his particular vocabulary. He's the same. It's a fight for him. He hasn't lost a fight in four years or so. The guy likes to fight. He's going to train hard. There's no difference mentally."