It's Lights Out for Chris Lytle's Career, and Right On Time 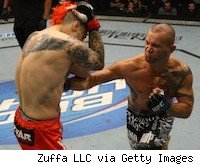 Congratulations, Chris Lytle. Now go away and stay away. I mean that with all due respect. Don't come back from retirement. Don't ruin your perfect ending. Few fighters say goodbye in the way you did, in the way they want to.

Most of them hang on too long, or chase every last dollar. Most of them leave us shaking our heads.

Not Lytle. He won four of his last five, had his biggest paydays, and then said goodbye.

"I've never seen anybody leave the sport on good terms with wins," he said afterward. "Everybody goes when they get knocked out three times in a row. It's like, oh well, that's it. I wanted to be the only guy ever to go out on a good streak. Hopefully I did that."

Yes, sir, you did, even if some people doubt that you're retired for good.

The skepticism is understandable. Few fighters walk away gracefully. Even the great ones have trouble knowing when to hang up their gloves. But there is reason to believe he will keep his word and let this be the last time. For one, Lytle's always been a stand-up guy. Honest with the fans, honest with the media. Remember, years ago, after losing to Matt Serra in a performance he later regretted for his cautiousness, Lytle vowed never to hold back again.

That was the beginning of the Lytle who became the UFC's bonus baby, willing and able to turn any fight into a battle.

"Some people might say, you should try to win more," he said about his gambling style, "but I've got to be me. I've got to fight the way I want to fight."

Win some, lose some, but bore no one. That might as well have been his motto in his later years.

Fighting a motivated Dan Hardy that was essentially fighting for his job, Lytle put on one last inspired performance, out-landing his British opponent 127-61, according to FightMetric.

Then in the third, Lytle closed the show in style. As Hardy shot in for a late takedown in hopes of stealing the round, Lytle attacked his neck and secured a guillotine. Hardy hadn't been submitted since 2005, but Lytle finished him in short order, moving into mount and squeezing the hold until Hardy was forced to tap.

For his efforts, Lytle was awarded Submission of the Night and with Hardy, Fight of the Night. The two awards were his ninth and 10th in his UFC career, giving him the most nightly bonus awards in UFC history. Ahead of Anderson Silva, ahead of Chuck Liddell, Randy Couture, and everyone else who's ever walked into the octagon.

But Lytle also shared a moment that was beyond prizefighting, one that will always be priceless to him. After winning the main event, Keegan and Kaylin -- two of his four children -- were let into the cage to celebrate his final moments with him.

Hands raised and children by his side. Is there a better way to go out?

While there may be calls for him to continue onward -- and after his recent run, it's understandable -- Lytle's reasons for walking away resonated on the night where the MMA community lost an important figure, the noted trainer Shawn Tompkins.

For Lytle, it was all about family. After his UFC 127 fight, Lytle said that for the first time, he didn't want to go to the gym. After so many years of grinding away at his craft, he was starting to feel selfish about focusing so much time on himself.

"I just want to tell you guys that I honestly love being a fighter, I love being part of the UFC," he said after winning. "I love it probably more than anything in my life, except for one thing, and that's my family. It's time for me to dedicate more time to them and quit putting myself first."

It's rare to call an octagon moment "touching" or "sweet," but watching him walk out with his kids was one of those times.

As we were reminded on Sunday, we aren't promised the future to spend with our families and loved ones. On Thursday, Lytle turns 37. It is not ancient by any stretch. As a well-conditioned pro athlete, he might even be considered young alongside most people his age. But that was also Tompkins' age at the time of his unfortunate passing.

Hopefully, Lytle has many years to share with the people he loves. Aside from Keegan and Kaylin, he has two other children, Corrine and Jake, with his wife Kristin.

He has earned his right to walk away at the height of his career, even if he leaves us wanting more.

He has given us plenty. We had our turn. So, goodbye, Chris, and thanks for the memories. Now go make some with your family.