Falling Action: Best and Worst of UFC on Versus 5 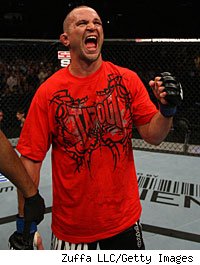 You can say this for the UFC's free fight cards: they're always worth your money, even if you pay for them by sitting through the same few commercials over and over again.

Last night in Milwaukee fight fans got treated to a little piece of MMA history, as one of the sport's great battlers called it quits and went out on a triumphant victory. If you didn't feel a little choked up watching Chris Lytle hug his kids in the Octagon after a brutal scrap to end a hard-nosed career, better check your battery life, because you may be a robot.

It's great to see those moments broadcast live to the entire cable TV universe, but it wasn't all puppy dogs and rainbows at UFC on Versus 5. Now that we're faced with the sober reality of Monday morning, it's time to sort through all the winners, losers, and everything in between.

Biggest Winner: Chris Lytle
It's so rare to see pro fighters walk away when it's time. It's rare to even see them walk away when it's a quarter past time. Usually, the appeal of the money and fame combines with the addictive power of adrenaline and the unbreakable spirit that got them here to begin with, and the result is a person who wants to hang on to a fighting career until promoters and fans are stomping on his fingers to get him to let go. Lytle had seen that in action enough to know he didn't want to find out what it felt like, and so he made the perfect exit at the perfect time. From the opening moments of the bout he fought like a man who was determined to see someone get beat up and he didn't particularly care who it was. After boxing Hardy up and surviving a few wobbly scares of his own, a submission finish in a fight that he never tried to take to the mat feels like the absolute right ending to Lytle's great career. Heading out with $130,000 in bonuses probably doesn't hurt either. So long, Chris. Thanks for the memories.

Biggest Loser: Dan Hardy
He fought exactly the fight that Lytle wanted him to, right down to the ill-advised takedown with his neck wide open in the third. That's four straight for our mohawked friend, and he should be very grateful that the UFC loves his fighting style and his attitude so much that it doesn't mind when one or both results in a losing streak that would embarrass the Detroit Lions. But his losses aside, keeping Hardy is the right move here. The UFC has been too quick with the cuts in the past, as if it's impossible for fighters to go through a lull and come back strong. Hardy fought for the welterweight title a year and a half ago. On Sunday he was one half of the Fight of the Night, so it would be hypocritical to reward his efforts and praise his fighting style while also giving him his walking papers. I know, the UFC has done that very thing in the past, but that doesn't make it right. Eventually, however, Hardy might have to choose between fighting smart and fighting to the UFC's liking. Reminder: just because you want to stand and bang, that doesn't mean you have to stand in only one spot, exactly where your opponent's left hook knows how to find you.

Most Surprising: Ben Henderson
With a win over Miller, he joined a very small club that includes only the current UFC lightweight champion and the current no. 1 contender. By battering Miller into a bloody mess, Henderson established his own club where he, as the only member, gets to write the bylaws (first rule: haircuts are optional). It's one thing to survive all Miller's submissions and eek out a decision. It's quite another to shrug off those submissions and punish him severely for each attempt. Miller is a very good lightweight, and we've never seen anyone take it to him like Henderson did. Put this kid in a fight with Clay Guida and you'll have your next lightweight challenger by the time the dust clears. Also, getting down on bended knee to plead for the UFC to give your teammates a look? Yeah, that's a pretty awesome move.

Worst Game Plan: Amir Sadollah
So he came into a fight with one of the most experienced kickboxers in the UFC and decided it would be a good idea to keep it on the feet in the early going, huh? As much as I respect a man who's always looking to test himself, in retrospect that doesn't seem like such a good idea. Sadollah needed to get this fight to the mat, and he should have known that. Instead of making that his primary goal, he went toe-to-toe with "Bang" and only tried for takedowns right after getting rocked, when his lunging attempts were more desperation than technique. That's exactly the kind of thing people are talking about when they talk about the difference that experience makes. Sadollah hung tough and took his beating like a man, so he'll likely benefit from this painful little lesson. Let's just hope he only has to learn it once.

Weirdest Post-Fight Request: Duane Ludwig
You'd think a 33-year-old man would have other things to think about after a big win than getting Joe Rogan's signature on his MMA doll -- sorry, action figure. But hey, we all have our quirks, I suppose. The strangest thing is how quickly he had that thing ready. That means he probably asked one of his cornermen to bring it down to the cage with them, at which point I imagine Trevor Wittman looking at him and fighting the urge to say, 'You're a grown man, Duane!' As for Ludwig's plea to get the UFC to acknowledge his record for the fastest knockout, there he actually has a good point. Maybe Dana White can send an intern down to the copy shop to print up an official-looking certificate to give him. Then Ludwig can put it in his rec room along with all his autographed MMA dolls action figures. At least he's a savvy enough collector to keep them in their original packaging, which is more than I can say for a certain host of a certain MMA Hour.

Most Brutal: Donald Cerrone
In case you couldn't tell, "Cowboy" is just straight-up mean. He has very little regard for the feelings of others, and seems to take immense pleasure in their pain. A lot of people think that's common among pro fighters, but it really isn't. Most guys just want to win and dominate. They might even feel a little bad about punishing someone more than necessary. Cerrone? Let's just say that if the UFC ever goes under, he could find work as a freelance debt collector. Since coming over from the WEC, he seems to have only improved his overall game and even learned to come out of the gates a little quicker. I'm not sure if he's got all the tools necessary to get to the top in this division, but he certainly has the ability to lay down some beatings and instill fear in some hearts along the way. For now, that's good enough.

Sharpest Decline: Charles Oliveira
Remember when he was the undefeated whiz kid coming straight outta Brazil? Once he got above the level of the Efrain Escuderos, his ascent stalled. Not that he's gotten an easy road, mind you. He got thrown in against Jim Miller, which is a tough draw for any lightweight. Then he had the unfortunate (very) illegal knee incident against Nik Lentz, which cost him a win. But against Cerrone he quickly looked like a man who didn't really want to be in there. Calling time for what was far more of a leg kick than a groin shot should have been the first sign. Crumpling up after that pitiless body shot was the last. There's no question that he's got skills, and he's still young enough for these to be valuable learning experiences, but he needs to grow up in a hurry if he's going to hang at this level for very long. In case the matchmaking hasn't already tipped him off, perhaps someone should point out that the UFC doesn't take it easy on anyone.

Most in Need of a New Weight Class: Joseph Benavidez
Give credit to the Joe-Jitsu master, he's perfected the art of closing the distance against taller opponents, probably because he's been doing it his whole career. The fact that he's been this successful against bigger guys at 135 pounds only strengthens my belief that he's essentially the de facto champ in the 125-pound division, which exists in the UFC only as a promise at this point. Soon, they say. Soon they'll gather up the little fellas and start this new weight class. That day can't come soon enough for Benavidez, who seems like he'd be absolutely dominant if he could ever get the chance to pick on someone his own size.