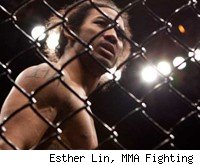 MILWAUKEE – Jim Miller might be wishing he could take back his initial comments about the WEC's lightweights coming over to the UFC.

Though Miller softened his stance that the WEC 155-pounders might not be worthy of UFC status during a media call 10 days ago, he may want to wipe the entire thing from his memory.

Sunday, in the co-main event of UFC on Versus 5, former WEC lightweight champ Ben Henderson had little problem with Miller – snapping his seven-fight UFC winning streak and sending him back to the middle of the pack in the division and eliminating him from the near-term title picture.

Henderson, who is now 2-0 in the UFC, said he wasn't sure who the top contender for the title should be – but wouldn't argue if it was him.

"I'm not really sure – I just want to make sure I get my hand raised and I'll do my talking inside the cage," Henderson said. "But what do you guys think? The No. 1 contender, and that kind of a performance? You tell me. What does Dana (White) think? What does Joe Silva think? What does Sean Shelby think?"

Henderson said the win was the biggest of his career – and that includes winning the WEC lightweight title, as well as retaining it before losing it to Anthony Pettis in December.

With Miller's seven-fight streak snapped, there is a new logjam in the lightweight division for next top contender. Frankie Edgar defends his belt in a rematch against Gray Maynard on Oct. 8 in Houston. But who will the winner get? It was presumed to be Miller, had he won.

Now Clay Guida has won four straight and doesn't yet have his next fight booked following his win over Pettis in June. Melvin Guillard is on a five-fight streak and meets Joe Lauzon in October. Former WEC star Donald Cerrone has won five straight. And then there's Henderson.

But one thing is for certain – Henderson got the last laugh when it comes to Miller's assessment of the WEC's 155 pounders.

"I'll just say this," Henderson said, before throwing up a big grin he hoped would do the talking for him.