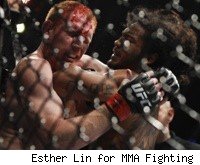 MILWAUKEE – It all could have been so simple. Then Ben Henderson went and messed everything up.

The former WEC lightweight champ won his second straight in the UFC, dispatching Jim Miller – one of the most vocal critics of the WEC's lightweights at the time of the merger with the UFC – with relative ease on Sunday night.

But Henderson's win over Miller in the co-main event of UFC on Versus 5 did more than just make a statement about the quality of the former WEC 155-pounders. (Donald Cerrone shared the victory stage with Henderson after improving to 3-0 in the UFC in 2011.) It eliminated Miller and his seven-fighting winning streak, which would have reached eight had he beaten Henderson, as the easy choice for the next No. 1 contender in the UFC's lightweight division.

Instead of a clear-cut top pick to face the October winner of the Frankie Edgar-Gray Maynard rematch, there's a tight pack at the top – including Henderson and Cerrone. But Henderson, for the most part, said he would leave that top contender decision in the hands of the UFC and let his win over Miller do the talking for him.

"I just want to make sure I get my hand raised and I'll do my talking inside the cage," Henderson said. "But what do you guys think? (I beat) the No. 1 contender, and that kind of a performance? You tell me. What does Dana (White) think? What does Joe Silva think? What does Sean Shelby think?"

Henderson told MMA Fighting at the post-fight press conference he believes there are several fighters clamoring to get the shot now that Miller has to go back to Square One, including Cerrone and his teammates at Greg Jackson's camp in Albuquerque, N.M.

"Jackson's camp has some tough 155-pounders," Henderson said. "I think the top guys are (Clay) Guida, (Melvin) Guillard, probably myself. But whoever. Whatever."

Cerrone took a quick shot at Miller's criticism of the WEC lightweights before saying he believes Henderson should be next in line for his domination over the previous presumed top contender.

"We're not the little brother, right? I think the little brother just beat up the big brother. It feels good for the WEC boys to be back on Versus making it happen," Cerrone said. "I think Ben is next – unless he wants to fight me. That would be the only other thing."

A Cerrone-Henderson matchup next would not be out of the question, though the UFC might not want to pair up two of its newest stars-in-the-making so soon. Henderson and Cerrone have fought twice before, each time with the WEC's lightweight belt on the line. Cerrone's last two losses have come at the hands of Henderson – once by decision for the interim title, and once by guillotine in their rematch.

Cerrone saw his winning streak hit five with a quick and dominant TKO against Charles Oliveira, one of the UFC's most highly touted young talents. His five straight wins now stand right next to Guillard's five straight, though two of Cerrone's came to close out his WEC career.

Guida has four straight wins, including an upset of former WEC lightweight champ Anthony Pettis in June. Other fighters with four straight in the division include Nik Lentz and Jacob Volkmann, though neither have been as high profile as Guida.

Guillard is scheduled to fight Joe Lauzon at UFC 136 on Oct. 8 in Houston, the same night as the Edgar-Maynard rematch. Guida does not yet have his next fight scheduled.