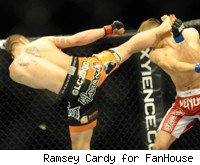 Amir Sadollah has been carefully brought along by the UFC since winning The Ultimate Fighter three years ago, but on Sunday night his career progress took a step backward at the hands of Duane Ludwig.

Ludwig showed that he was a superior striker -- and exposed some flaws in Sadollah's game -- by winning a unanimous decision at the UFC Live on Versus event in Milwaukee. All three judges scored the fight 29-28 for Ludwig, who took control early on and managed to hold on despite appearing to run out of steam late in the fight.

More: UFC on Versus 5 Results | Duane "Bang" Ludwig vs. Amir Sadollah Live Blog
In the first round Ludwig's Muay Thai striking had Sadollah in a lot of trouble: Ludwig hit Sadollah with punches, kicks, knees and elbows that had Sadollah reeling, and it was all Sadollah could do to grab on to Ludwig and survive the round.

In the second Ludwig continued to batter Sadollah standing up, landing combinations of punches to Sadollah's head that Sadollah couldn't answer. By the end of the second round Sadollah's face was badly bruised and swollen, and it was clear that Ludwig was up two rounds to none.

At the start of the third Sadollah tried to shake things up with a takedown, and he did succeed in getting Ludwig down to the ground. Sadollah also began to land more punches in the third round, while avoiding taking damage of his own. But Sadollah never came close to ending the fight, and just winning the third wasn't enough for Sadollah, whose professional MMA record drops to 5-3 with the loss.

Ludwig improves to 21-11 with the victory, and he's now on a two-fight winning streak in the UFC.