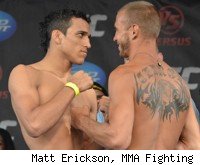 MILWAUKEE – This is the UFC on Versus 5 live blog for Donald Cerrone vs. Charles Oliveira, a lightweight bout on tonight's UFC card at the Bradley Center in Milwaukee.

Cerrone (15-3, 1 NC, 2-0 UFC) comes into the fight riding a four-bout winning streak, including his first two in the UFC following its merger with Cerrone's old home base, the WEC. In his last four, Cerrone has cruised past Jamie Varner and Vagner Rocha by decision and has submitted Paul Kelly and Chris Horodecki. Oliveira (14-1, 1 NC, 2-1, 1 NC UFC) is looking to turn his fortunes around. After starting his UFC career 2-0, and winning the first 14 fights of his career, he has a loss and a no contest in his last two fights.

Round 1: Crowd is behind Cerrone here. And both fighters throw some nifty little kicks and jabs to star. Cerrone lands a nice knee to the body and tells Oliveira to come forward. But Cerrone throws a right kick, and it lands right in the mommy-daddy parts. Oliveira instantly covers up, and Mario Yamasaki gives him time and then sends him to a neutral corner. They have a nice moment in the middle on the restart where they have a peace offering. But it lasts only 1 second beore they kick each other some more. Inside leg kick from Cerrone, who has been saying he's a slow starter. He seems to be off to a little quicker start tonight, and he pushes forward with a couple lefts and a leg kick. Cerrone lands a big body shot, then a knee while Oliveira is falling backward. Oliveira crumples to his back, Cerrone pounces and lands right-lefts over and over again until Oliveira can't stop it and Yamasaki waves it off. So much for slow starts for the Cowboy.