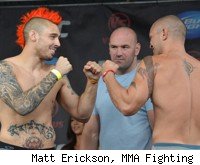 MILWAUKEE – This is the UFC on Versus 5 live blog for Dan Hardy vs. Chris Lytle, the main event of tonight's UFC card at the Bradley Center in Milwaukee.

This will be the final fight in the career of Lytle (30-18-5, 9-10 UFC), who announced late Saturday he will hang up the gloves following this bout. After a four-fight winning streak had his name being talked about for a possible welterweight title shot, Lytle suffered an upset loss to Brian Ebersole at UFC 127 in February that prompted his thoughts of retirement. Hardy (23-9, 1 NC, 4-3 UFC) is in desperate need of a victory, having dropped three straight starting with a welterweight title loss to Georges St-Pierre.

Round 1: Chris Lytle touches gloves to open things up for the last time. He'll retire after this fight. And he comes forward first with a left, then a left and a body shot. These two have promised to stand and bang, and that's what we're getting early as Hardy lands a few nice shots. Lytle is working nice shots to the body. The crowd starts a "USA!" chant, but it doesn't last long. Nice combo from Lytle, and then another one. He blocks a high Hardy kick. Hardy then lands a nice right. Big bombs from both, and they both smile. Another to the body from Lytle. And another. Lytle swings hard, but misses and stumbles as he does. Then he eats a pair of lefts from Hardy. The crowd starts a "Let's go Lytle!" chant, and he catches Hardy with a few punches. But hardy is coming forward. Lytle lands a nice left hook that bounces Hardy's head back a little. It's a fun first round, and we'll give it 10-9 to Lytle in his swan song.

Round 2: Lytle comes forward immediately and lands two nice rights. They stand and trade some more, with Lytle getting the better, but Hardy landing some, too. Hardy does a little damage, then hits Lytle with one that buckles his knees. Lytle clinches up in defense, and Hardy lands a knee before they break. On the break, Lytle paws a left jab and Hardy gets a finger in the eye. He'll take a break for a second, and then they start right back up. Lytle lands big shots, and Hardy smiles them off. Hardy lands a big right, and Lytle buckles again. But he stays on his feet and they go to the ground. But it's right back up again. Left-right-left from Lytle rocks Hardy, but Hardy keeps pushing forward. A great big right from Lytle lands. But Hardy stays right in the pocket. Hardy stops to check the clock at 30 seconds, and they keep trading leather, including a nice left from Lytle as the round comes to a close. Despite the two from Hardy that landed flush, we'll give the round to Lytle 10-9.

Round 3: Lytle walks out for the last time to start a round. But he gets right back to scrapping. Hardy lands a few good knees and some punches. A couple to the body, then head for Lytle. Both fighters are showing the effects of 12 minutes of slugging it out, but they're not gassed. Both are landing decent shots – but none big enough to put any kind of finishing touch on. When Hardy covers up, Lytle goes to the body, then pops him in the mouth after that. Nice knee from Hardy is followed by a right that pushes Lytle back. Both guys throw haymakers that just miss. With a minute left, thy start really throwing down. And Hardy pulls a stunner and shoots. Not a good idea. Lytle wraps him up, locks in a choke ... and Hardy taps! Lytle wins his finale – and there's a very good likelihood he's going to get a double bonus for Sub of the Night and Fight of the Night.