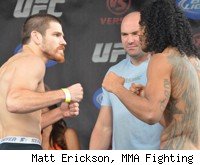 MILWAUKEE – This is the UFC on Versus 5 live blog for Ben Henderson vs. Jim Miller, a lightweight bout on tonight's UFC card at the Bradley Center in Milwaukee.

Miller (20-2, 9-1 UFC) comes into the fight with one of the promotion's most impressive winning streaks. His seven straight wins almost certainly have him in line to be the next lightweight title challenger, should he get past Henderson. The only two losses of Miller's career have come to champion Frankie Edgar and Gray Maynard, whose rematch is in October. Henderson (13-2, 1-0 UFC), the former WEC lightweight champ, won his UFC debut in April and is looking to spoil Miller's streak and his chances for a UFC title shot.

Round 1: Very important fight for the lightweight class. We touch 'em up and get swinging. Miller lands biggest first witha right-left. He seems aggressive, but Henderson clips him with a short uppercut to get his attention. They clinch up and trade some knees, and Miller is looking for a choke. He jumps onto Henderson and locks his legs around him. Henderson has an arm in, and Miller is likely to wind up on the ground from this. And he does. Henderson stays patient and takes him down. But Miller is still working for that choke – and Henderson slips out of it and looks for some short elbows. Miller pushes out from guard, but now Henderson has a chance to look for a choke. As Miller pops up, Henderson throws a great high kick that Miller partially blocks, and they tie up along the fence. Henderson drops Miller down again, and Miller looks for a triangle while holding on to Henderson's right arm. But Henderson pops out, lands a couple shots from his feet, then dives in looking for a guillotine. It's not there, and now MILLER gets a chance to work on another one. Henderson pops his head out pretty quickly, though, and lands some ground and pound from half guard. It's a highly entertaining first round, and we'll give it to Henderson 10-9.

Round 2: We're back to more of the same, trading big punches and kicks. They clinch up around a minute in, and Henderson bullies Miller to the ground again. Looks like Miller is cut above his right eye. Henderson has hiim on the ground and is landing some good shots there. Miller tries to roll out, and his head is leaving a lot of blood on the canvas. Henderson sees it and goes to work, landing strikes as Miller reaches for an ankle. HE's got it. He's twisting, but Henderson tells Josh Rosenthal he's OK. He stays calm, and he works right out of it. Back on the ground, Miller looks for a guillotine, but Henderson pops out of that and Miller again looks for an ankle. Henderson makes him pay, landing big shots. He then starts teeing off, then shootsin and slams MIller back down. He's absolutely dismantling him. Miller survives, and he again looks for any submission he can find. But Henderson is just not having it. It's another 10-9 round for Henderson, and the crowd goes absolutely ballistic for the former WEC champ.

Round 3: Henderson gestures to the crowd for support, and it responds. He touches gloves with Miller and Round 3 is underway. Miller has got to think he'll need a finish to send his winning streak to eight. The two trade strikes, and Henderson checks a kick and counters with a big shot that drops Miller. Miller pops back up and lands a short elbow that has Henderson wincing. A Miller left is timed perfectly with what appears to be a Henderson slip, more than a real knockdown. Miller pounces, but Henderson gets up and bullies him back to the canvas, where he then postures up and lands some heavy hands right in front of his own corner. Miller is covering up, giving his back, in defense mode Miller tries to slam him, drops him on his head ... and Henderson sinks in a rear naked choke. Miller survives it for now, but with two minutes left he's in a lot of trouble and eating Henderson ground and pound like crazy. Rosenthal watches closely. Henderson gets to side control, then pushes Miller to the fence and lands some more big blows. Miller is pretty bloody, and he's holding on for dear life. It looks like he's gassed, and with 30 seconds the crowd goes nuts for Henderson and his impending victory. Henderson flips Miller over and has a guillotine and is still looking to finish. He can't, but back on the feet he still swings for the fences. It's a 10-9 for Henderson, a huge wrench in the lightweight division, and a 30-27 win for him on our card.