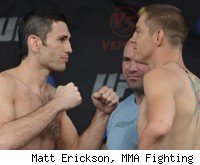 MILWAUKEE – This is the UFC on Versus 5 live blog for Amir Sadollah vs. Duane "Bang" Ludwig, a welterweight bout on tonight's UFC card at the Bradley Center in Milwaukee.

Sadollah (5-2, 5-2 UFC), the Season 7 winner of "The Ultimate Fighter" when he beat C.B. Dollaway, who fought on tonight's preliminary card, has won two straight, including a stoppage over DaMarques Johnson in March. Ludwig (20-11, 3-2 UFC) is just 1-2 since his return to the UFC, but won his last outing by split decision over Nick Osipczak at UFC 122. Ludwig and Sadollah were scheduled to meet in March, but Ludwig had to pull out of the fight due to an injury.

Round 1: Here we go to open the TV card. Thirty seconds in, we trade knees and both guys look for that Muay Thai plum just like we expected. Sadollah pushes Ludwig to the cage, but Ludwig pushes off and lands a few knees. Total clinch game right now, and both guys have a plum. Sadollah breaks out finally, and the two trade punches before Ludwig throws a pair of leg kicks up high that Sadollah blocks. Ludwig nearly lands a knee, and Sadollah answers with a teep to keep the distance. Ludwig is landing some decent shots, then rocks Sadollah with a big combination. Sadollah survives, but his face is pretty beat up. Ludwig contineus to land up top, then goes to the body. He goes back to head-body like Marky Mark in "The Fighter." It's working. Ludwig gets the first, 10-9, on the MMA Fighting card.

Round 2: Traded kicks for the first 30 seconds, and the crowd likes it. Superman punch from Sadollah goes nowhere. But Ludwig pushes forward and lands some nice combos in tight. Ludwig seems to be getting the better of these exchanges, both in the kicking game and with the punches. But Sadollah's face is more beat up, so that might make a difference in that perception. Sadollah is backing up more, for sure. They again trade in tight, and again Ludwig lands some big shots that force Sadollah to plum up and then drop for a takedown, which Ludwig stuffs. Ludwig tries to shoot, but Sadollah stuffs and we move back to the feet. They clinch briefly, then break. Ludwig is having no problem landing punches, and now even elbows, to Sadollah's noggin. It's another 10-9 round for Ludwig on the MMA Fighting card.

Round 3: Sadollah likely will be in desperation mode here, and he comes forward hard and goes for a takedown that Ludwig brilliantly sprawls out to stop, for the most part. Ludwig does end up on the ground for a moment, but he's right back up to Sadollah's dismay. A beautiful front kick from Sadollah is right on the button on Ludwig's chin, and it backs him up. But he doesn't fall, and he soon lands another punch to Sadollah's chin for his troubles. More kicks are traded, and Mike Dolce in Ludwig's corner yells for him to go hard. Sadollah lands a nice body kick. A high kick from Sadollah is blocked by Ludwig, but the sound popping off his glove gets the crowd jazzed. THey trade strikes in close, and at the 45 second mark, the crowd goes bananas – B-A-N-A-N-A-S – for a wild and crazy finish. But it's not to be. Ludwig shoots, Sadollah sprawls, and they'll end things on the ground. MMA Fighting has the third 10-9 for Ludwig, though it's closer, and the fight for him 30-27.