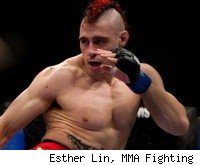 There are two ways to think about Sunday night's Chris Lytle vs. Dan Hardy matchup: what it could be, and what it is likely to be. By almost all accounts, Lytle has a vastly superior ground game to Hardy. It is an area where he can control and perhaps even finish the fight. But it is an advantage he is unlikely to be too interested in exploiting.

Lytle (30-18-5) simply doesn't do that. A former boxer, he prefers to trade strikes with the belief that he has better hands than his opponent, and that fans have a greater appreciation for the standup portion of mixed martial arts. While that philosophy has led to more losses than he might otherwise have on his ledger, it has also kept him steadily employed in the UFC despite a 9-10 record in the organization.

The crowd-pleaser has promised that nothing will change against Hardy. It's a promise Hardy has heard before. In his last bout, he faced Anthony Johnson, a noted slugger who vowed to go toe-to-toe with him. But when the fight began, Johnson changed course, taking Hardy down four times and forcing him to spend nearly the entire 15-minute fight on his back.

Resisting wrestlers has been one of Hardy's biggest weaknesses. According to FightMetric, in his his seven UFC fights, he's only stopped 31 percent of takedown tries.

Even if fans didn't know the percentage, they knew that was one area in which he has trouble. Not so obvious are his issues in the standup department. While Hardy is 23-9 with one no contest in his career largely on the strength of his striking, it is surprising to look further into the numbers.

The most glaring one is that Hardy gets hit far more often than he connects himself, a trait not shared by most high-level fighters. According to FightMetric's numbers, Hardy lands 1.77 strikes per minute while absorbing 2.43 strikes per minute. Unless you hold a serious edge in power, those numbers do not translate well to winning.

Compustrike's numbers show the same issue. According to them, Hardy's seven UFC opponents have out-landed him in the standing portion of the fight 53.4 percent to 46.1 percent. He's made up some of the difference in volume, firing off more strikes over the course of his bouts.

That volume edge might be nullified by Lytle, who is a very active striker, landing an average of 3.43 strikers per minute -- a number almost twice that of Hardy.

Even as he ages -- Lytle turns 37 next week -- he hasn't really slowed down. During a September 2010 fight against Matt Serra, Lytle landed 153 significant strikes by FightMetric's count. Combined with Matt Serra's 124, the pair set a record for the most combined landed significant strikes in a fight. The mark sailed past the old record, which was held by Paul Taylor and ... you guessed it, Chris Lytle.

In his last fight, though, Lytle wasn't really himself, throwing only 72 standing strikes, well below his usual range. Though he didn't disclose it at the time, just four weeks before the fight, he'd had his right meniscus removed. That's not the type of injury that allows you to fight at full strength such a short time later, making the loss seem more understandable.

Given Lytle's striking skills and clear advantage on the ground -- hey, it might end up there by accident -- it's fair to tilt this match in his direction. But there is also the possibility that this injury combined with age will slow him down, and he won't be quite the dynamic force he's been all these years. If he's not, Hardy may begin to pick him apart. One stat worth noting that is wildly in Hardy's favor is reach. He has six inches of reach on Lytle.

That's not always been a problem for Lytle to navigate. He understands how to get in and out, and even if he doesn't always avoid the fight-changing shots, he's always shown a good enough chin to stand strong under pressure. (In over 50 pro fights, his two career TKO losses are both due to cuts.)

Since the start of 2007, Lytle is 8-5, and he's been nobody's stepping stone. Even standup heavy specialists have had their troubles with him. With Hardy's propensity to get hit, Lytle will have his moments, and with Hardy's offensive skills and reach, he'll fire back and connect, making this a tough one to score for judges. Let's hope it gets finished, because three rounds may otherwise not be enough to decisively determine a winner. In the end though, it's tough to pick a fighter who gets hit as often as Hardy does. Lytle by split decision.