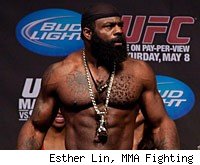 Kimbo Slice, the former street fighter turned MMA fighter who has been out of the fight game since the UFC cut him 15 months ago, stepped into the ring for his first professional boxing match on Saturday night. It went about as well as he could have hoped.

According to multiple accounts of the bout posted on Twitter, Kimbo knocked out his opponent, a man named James Wade, in just 17 seconds.

It's important to note that Wade came into the fight with a record of 0-1, and he was knocked out in his only previous fight. So it's not like Kimbo beat a particularly impressive opponent. The fact that Kimbo was fighting an 0-1 fighter at a casino in Oklahoma on a card that wasn't even televised indicates that promoter Gary Shaw knows Kimbo has a long way to go before he'll be a legitimate fighter who's ready for public exposure.


But Kimbo remains a well-known presence in the fight game, thanks to his time in the UFC, in EliteXC fights on CBS before that, and even thanks to his YouTube fights before he ever had a sanctioned bout. And now he's 1-0 as a boxer.