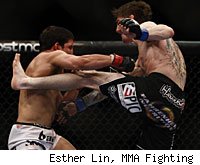 In a 15-minute brawl between two of the best 135-pound fighters in the world, Joseph Benavidez took a unanimous decision over Eddie Wineland at Sunday night's UFC Live card.

All three judges scored the fight 30-27 for Benavidez, whose record now stands at 15-2, with both losses coming by decision to UFC bantamweight champion Dominick Cruz. Benavidez can make a good case that he's the second-best bantamweight in the world.

Although Benavidez wasn't particularly successful in getting Wineland down, the fight gave him some good opportunities to show off his diverse striking arsenal. Particularly impressive was a flying knee against the cage that Benavidez used after hurting Wineland with a combination of punches.

More: UFC on Versus 5 Results | Joseph Benavidez vs. Eddie Wineland Live Blog
Benavidez said afterward that he would have liked to use his wrestling, but he had to take what was available to him.

"He has great takedown defense," Benavidez said. "I think I can stand with anyone in the division. ... I train to be great everywhere."

UFC announcer Joe Rogan said several times during the fight that Benavidez is a likely future title holder at 125 pounds, whenever the UFC opens a 125-pound weight class. At the moment, Benavidez is fighting bigger men at 135 pound -- and he keeps winning anyway.