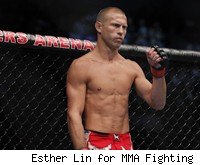 Cerrone, who moved to the UFC this year after fighting in World Extreme Cagefighting, is now 3-0 inside the Octagon, and he's rising up the ranks in the welterweight division.

"This was a perfect fight for me to show my skills," Cerrone said afterward.

More: UFC on Versus 5 Results | Donald Cerrone vs. Charles Oliveira Live Blog
After a couple minutes of Cerrone and Oliveira feeling each other out on their feet, Cerrone began to push the pace of his striking, and he landed a hard punch to Oliveira's midsection. That hurt Oliveira, and Cerrone followed up with a hard knee just as Oliveira was falling onto his back.

Mindful that Oliveira is an excellent Brazilian jiu jitsu practitioner, Cerrone at first hesitated to follow Oliveira to the ground. But after a moment Cerrone stood over Oliveira and rained down punches, and when Oliveira did nothing more than cover up his head, the referee stepped in to stop the fight, 3 minutes and 1 second into the first round.

For Oliveira, the last several months have been a huge disappointment: Not long ago he was 14-0 and considered one of the sport's truly elite young fighters, but in his last three fights he has two losses and a no contest. But Cerrone is on a five-fight winning streak and looking better than ever.