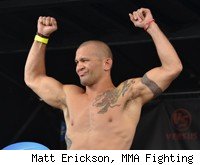 MILWAUKEE – Just one day after inferring a win over Dan Hardy could mean he had a title run left in him, Chris Lytle has announced his retirement.

Lytle, who fights Hardy in the main event of UFC on Versus 5 on Sunday in Milwaukee, informed UFC president Dana White that Sunday's fight would be his last. NBC Sports reported the news early Sunday morning.

Lytle handed White an envelope before he weighed in at the Harley-Davidson Museum on Saturday. According to NBC Sports, the envelope held a letter thanking White and the UFC, and a formal intent to retire from the sport. In White's video blog, put online late Saturday night, Lytle can be seen telling Hardy this would be his final fight.

"I've been fighting since '98, fighting forever," Lytle told NBC Sports. "A lot of it is just that I'm not doing my responsibilities like I need to at home. I feel like I'm not being the type of dad I want to. I've got four kids and lots of times I feel just an immense sense of guilt for not being there in times when I should."

On Friday, following a short workout, Lytle was asked if he believed he could get back in the hunt for a shot at a UFC welterweight title. He owned a four-fight winning streak prior to his upset loss to Brian Ebersole in February.

"If I go out there and just put on great fights – and I'm trying to win all of them – and win in spectacular fashion, it's not going to take eight fights," said Lytle, who will turn 37 later this week. "It's going to take a few. I feel like I'm still on the radar, and if I get a couple wins ..."

But those couple wins apparently will not come. He'll have a chance to go out with one victory against Hardy, in a main event fight nationally televised on Versus, before hanging up the gloves.

Lytle (30-18-5, 9-10 UFC) has put together one of the better career stories in MMA history. He made his UFC debut at UFC 28 in November 2000, predating even Zuffa's purchase of the promotion. A loss to Ben Earwood put him at 5-6-3 in his pro career, with most of his fights at that point in Japan for Pancrase and in his home state of Indiana. He went on a nice run after his UFC debut and returned at UFC 45, but lost to Robbie Lawler.

A win over Pete Spratt outside the promotion got him called back, and he won consecutive submissions against Tiki Ghosn at UFC 47 and Ronald Jhun at UFC 49. After toggling back and forth between the UFC, WEC (not yet owned by Zuffa) and other promotions, Lytle was asked to join the Season 4 cast of "The Ultimate Fighter," which featured former UFC fighters looking to make their way back to the promotion – with the winner guaranteed a title shot against Georges St-Pierre.

Lytle made it to the finals of TUF 4, but lost a close split decision to Matt Serra. Serra would go on to stun St-Pierre at UFC 69, winning the welterweight title in arguably the biggest upset in MMA history. But after his loss to Serra, only one of Lytle's fights has been outside the UFC.

Though he has a sub-.500 record in the UFC, he can bring that mark to 10-10 with a win over Hardy on Sunday night. Hardy has lost three straight fights, and both fighters have promised to put on a Fight of the Night-caliber performance – and both are likely to come out looking for fireworks now that they know it's Lytle's last rodeo.

That news may have been part of the reason White decided to up the ante on Sunday night's bonus amounts. Previous UFC on Versus shows have featured bonuses in the amounts of $40,000 and $50,000. For Sunday's card, the post-fight bonus awards will be $65,000, putting it on par with UFC pay-per-view amounts. Lytle has won eight post-fight bonus awards, including Fight of the Night for his lost loss, at UFC 127, to Ebersole. At one point, Lytle won bonus awards in four straight fights and seven of eight appearances. In total, he has five Fight of the Night awards, two Submission of the Night bonuses and one Knockout of the Night. The eight total ties him with Anderson Silva for the UFC record, and he'll likely be hoping to take the lead on Sunday.

Though Lytle said he thought a run at a title wasn't beyond reach for him, he also told MMA Fighting on Friday that retirement had indeed crossed his mind after his loss to Ebersole.

"After this last fight, I had a lot of injuries and that was one of the things I was contemplating," Lytle said. "I don't want to keep fighting if I can't perform like I've been doing. So I took some time off, hung out with the family a little bit and let my body heal up. I actually got to relax a little bit – it was pretty cool. I had about a month where I didn't do too much. That's a rarity."

Apart from his UFC career, which at 20 fights is one of the most active in the promotion's history, and more than 30 fights outside the promotion in a career spanning back to 1999, Lytle is also a former professional boxer who went 13-1-1 between 2002-2005, mostly near his Indianapolis home. He is also a full-time firefighter in Indianapolis, and recently announced he had formed an exploratory committee to consider a run for the Indiana legislature.

But it is his family life, with four children, that he told NBC Sports played the biggest factor.

"I just feel like I have a lot of things in my head that I feel guilty about," Lytle said. "I have a great time fighting, and I love fighting - I want to do it all the time - but I think that sometimes it's time for me to not think about what I want and start thinking about what's best for other people."

Lytle's MMA swan song takes place at the Bradley Center in downtown Milwaukee on Sunday. The main card airs live on Versus at 9 p.m. Eastern. In addition to the possibility of one last bonus check, a win by Lytle would also get him a new 2012 Harley-Davidson Blackline motorcycle. The UFC announced Friday that the main event winner will get the bike as a bonus. Harley-Davidson is based in Milwaukee and is one of the UFC's top-tier sponsors.