Chris Lytle Adds to Record, Takes Two Bonus Awards at UFC on Versus 5 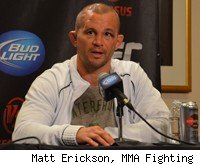 MILWAUKEE – It's really no surprise at all, is it, that Chris Lytle, in his swan song, would steal the show and take home not just one, but two post-fight bonus awards?

Lytle, who was a bonus machine in his time with the UFC, at one time winning four straight and seven in eight fights, added to his record total on Saturday night at UFC on Versus 5 in Milwaukee with a pair of bonuses – Fight of the Night and Submission of the Night.

UFC president Dana White made the bonuses official after the card at the Bradley Center. For his TKO win over Charles Oliveira on the main card, Donald Cerrone won Knockout of the Night. Each of the bonuses was worth $65,000 – a record for a UFC event on free TV.

More Coverage: UFC on Versus 5 Results

Lytle announced late Saturday that his main event against Dan Hardy would be his final fight, electing to hang up the gloves after more than 50 career fights. Though he entered the fight with Hardy with a sub-.500 UFC record at 9-10, it was his propensity to always deliver exciting fights that endeared him to the fans, fellow fighters and his UFC bosses.

With the two bonuses, Lytle ends his career with 10 in 20 UFC fights, pulling ahead of middleweight champion Anderson Silva, who was tied with him at eight going into Sunday night. Lytle also won a new 2012 Harley-Davidson motorcycle, which had been promised to the winner of the main event. MIlwaukee is home to Harley, one of the UFC's top-tier sponsors.

Lytle and Hardy both promised to stand and trade throughout the fight – and they did for 14 minutes, until Hardy inexplicably shot for a takedown. Lytle used that takedown to latch on to a guillotine, and Hardy was forced to tap.

Earlier on the main card, Cerrone, who has been down on himself for what he claims are notoriously slow starts, finally got out to a fast start against Oliveira. He pounded the highly touted prospect out just about three minutes into the first round.