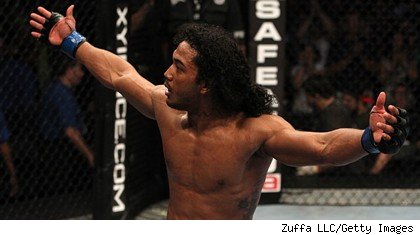 Jim Miller's seven-fight winning streak has come to an end, and Ben Henderson has made an emphatic statement that he belongs in the Octagon with the upper echelon of UFC lightweights.

Henderson, the former World Extreme Cagefighting lightweight champion, dominated Miller in the second and third rounds of their fight on Sunday night, earning the biggest victory of his career while also derailing any hope Miller had of fighting for the lightweight title any time soon.
The judges scored the fight 30-26, 30-27 and 29-28 for Henderson.

More: UFC on Versus 5 Results | Ben Henderson vs. Jim Miller Live Blog
In the first round both fighters showed off some high-level grappling, topped by Miller clinging to Henderson while attempting a standing side choke. One judge gave Miller the round because he had several good submission attempts, although Henderson did a nice job of fighting them off, and Henderson landed the harder strikes in the round.

The second round, however, clearly went to Henderson: Early in the second they went to the ground with Henderson on top, and Henderson landed several hard punches and elbows, opening up a cut next to Miller's right eye. Miller was relentless in his submission attempts, going for a knee bar and a heel hook, but Henderson continued to rain the strikes down on Miller and had Miller badly hurt by the end of the second.

Miller tagged Henderson with a hard punch early in the third round, but Henderson recovered quickly and took Miller down against the cage. From there Henderson showed that he was the stronger man, staying on top and in control and hurting Miller with hard punches and elbows. Blood was getting into Miller's eyes and making it hard for him to see, and as the fight ended Henderson celebrated, knowing he had won.