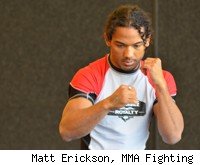 MILWAUKEE – Alanis Morrisette would call it ironic. Don't you think?

Eight months after taking an Anthony Pettis slapshot of a foot to the face, in what many consider the greatest single move in MMA history, Ben Henderson has to show up and fight in Milwaukee – Pettis' home turf, where he is the city's most beloved fighter.

But even though he is permanently tattooed with the memory of that Pettis kick off the cage at WEC 53 in December, one minute before Pettis took his WEC lightweight title and retired it, Henderson is just fine with how his career has progressed so far.

"I've taken baby steps all along in my career and it's prepared me for the next step in all my fights," Henderson said Friday after a short workout in Milwaukee. "I think this is just the next step, to be honest. It's a good opportunity for me to play upset and I'm excited for it."

If he's to play upset, as he says, it won't be a major one. Despite Jim Miller's seven-fight winning streak, and an almost certain lightweight title shot if he beats Henderson on Sunday at UFC on Versus 5, Miller is only about a 1.5-to-1 favorite in the fight.

Henderson (13-2, 1-0 UFC) rebounded from his loss at the WEC's final event, which came in his backyard just outside Phoenix, and topped Mark Bocek at UFC 129 in Toronto in April. He said there were no first-time UFC jitters thanks to those baby steps he's taken all along. But now he believes all the pressure is on Miller (20-2, 9-1 UFC).

"I think the onus is on him," Henderson said. "If he wins, he for sure gets a title shot. If I win, good for me, but it's not a guaranteed title shot."

As for Pettis, who lost to Clay Guida in June in his UFC debut after being put on hold for his immediate UFC lightweight title shot thanks to the Frankie Edgar-Gray Maynard draw, Henderson hasn't forgotten the kick. And he wonders if Pettis was exposed by Guida.

"He did a spectacular move, got a lot of attention for it, he's a great fighter – but a lot of times when you do those flashy moves, you're elevated a little higher than your actual standing, perhaps," Henderson said. "He was really highly elevated, and Clay Guida found a weakness in his game. I'm sure right now Pettis is in his gym working on his takedown defense."

Henderson isn't sure how the Milwaukee fans will react to him Sunday. But he is sure he'll get a chance for payback against Pettis, or at least his right foot.

"Pettis' biggest highlight reel is against my face," Henderson said. "So his fans know who I am. ... Before I retire, he and I will dance again. I've got something special in store for that fight."

Henderson fights Jim Miller on Sunday in the co-main event of UFC on Versus 5 at the Bradley Center in Milwaukee. The main card airs live on Versus at 9 p.m. Eastern.