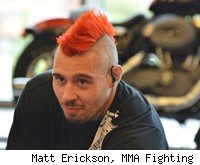 MILWAUKEE – Like his U.K. brethren The Who, Dan Hardy says he won't get fooled again.

Hardy's three-fight losing skid going into his main event against Chris Lytle at UFC on Versus 5 is why he's in desperate need of a win. But the former welterweight title challenger knows two things for sure going into Sunday.

He won't get "punked" again – not the way Anthony Johnson did him in March. And regardless of his 0-4 record in the United States, he doesn't take location into account too much for his fights – he knows a good fight will win him fans no matter where it's at.

"I don't think the location makes a difference," Hardy told MMA Fighting on Friday after a workout at the Harley-Davidson Museum in Milwaukee. "I'm constantly winning in the gym when I'm over here, and I met my girlfriend over here – and that's pretty successful so far. So I'm not going to hold it against the country. I think you pick up fans regardless of where you are. It's the style of the fight that's going to win the fans, regardless of where you are."

Hardy said his four losses on U.S. soil are more a matter of fluke and odd circumstance than anything gone awry on his part.

Against Pat Healy, who would go on to fight in the UFC, WEC, IFL, and was a winner on Friday's Strikeforce Challengers card to improve to 3-1 in that promotion, Hardy was in just his fourth pro fight.

"I took it on a day's notice – stepped in for a guy at the American Top Team," Hardy said. "I was out there training for a month, and I had (won) two fights. I came in undersized, got caught in a guillotine and ran out of gas. I put that one to bed – it was about experience."

Hardy then went back to his native England for his next 11 fights – and went 9-1 with a no contest sprinkled in. He returned to the States for a fight against Forrest Petz.

"I've never seen a video of it, but I beat the (crap) out of that guy," Hardy said. "I went to the afterparty, and he went to the hospital with a broken nose and stitches. I was fighting in his home town on a show his manager had promoted, and the next thing, he's got a contract with the UFC. So I kinda feel like I got stitched up a little there."

Hardy's two UFC losses came after he went 4-0 in the promotion. He got a shot at Georges St-Pierre's welterweight title in Newark last year, and suffered the same fate as many others since and before him – a dominant unanimous decision GSP victory. And against Johnson in March, he was simply outwrestled for three rounds – he was "punked," as he says.

"I think every one of the fights has its own circumstance and I don't tend to dwell on the location of it," Hardy said.

Against Lytle on Sunday, Hardy doesn't believe a second punking is in the offing. The loss to Johnson left him aggravated because he was under the impression Johnson wanted to stand and trade for a three-round slugfest. Instead, Hardy spent the majority of the fight on his back thanks to Johnson's takedowns, and a fight everyone thought would be an old-fashioned slobberknocker turned into a reason for the crowd to let Johnson know what it thought of him.

But Hardy blames himself, in part, for not being better prepared for Johnson's takedowns. And he also blames a little of the ol' what-goes-around-comes-around.

"I was annoyed, but I was annoyed with myself," Hardy said. "A few years ago when I was fighting on the Cage Warriors show, I did the same thing to somebody else. I guess it's karma. If he had been saying it to the media, but not saying anything to me, I wouldn't have bought into it. But it was the private messages between us, like, 'Yeah, we're going to steal the show. It's going to be a great fight.' But it was a smart game plan, and he outsmarted me, unfortunately. I only have myself to blame for that."

Lytle has said he's not out to "pull an Anthony Johnson" against Hardy, which ought to give the Brit some measure of relief. But with the three straight setbacks – GSP and Johnson, and a knockout loss to Carlos Condit in between – staring him in the face, a fourth could be deadly, and he knows it. Not many fighters stay in the big show with four straight losses.

"It's concerning because I love my job and I love being a part of the UFC," Hardy said. "But there's not much I can do with it. I'm three losses down. I can't take those back. I can only learn from them. I'm at the mindset where as long as I leave the Octagon on Sunday night knowing I gave it everything I've got, what more can I do? But for right now, I'm confident Sunday's going to be a good day. I know that Chris is a very beatable guy for me."

Hardy and Lytle fight in the main event of UFC on Versus 5 at the Bradley Center in Milwaukee. The main card airs live on Versus at 9 p.m. Eastern and also features a co-main event lightweight fight between Jim Miller and former WEC champ Ben Henderson.