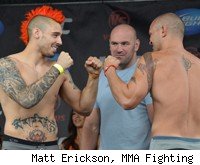 MILWAUKEE – Dan Hardy got perhaps the loudest ovation at Saturday's UFC weigh-ins – even though he wore Chicago Bears orange in green-and-gold Packers country. (OK, maybe it was meant to be Harley-Davidson orange.)

But Hardy, sporting bright orange for his signature mohawk, missed weight for his welterweight bout against Midwesterner Chris Lytle, weighing in at 171.5 pounds even after dropping four pairs of trunks that he wore for show. Lytle weighed in at 170.5 for the main event of Sunday's UFC on Versus 5 card.

After the official weigh-in event concluded, Hardy was able to make not just 171 pounds, but 170, the UFC confirmed. Hardy took to his Twitter feed, saying, "Not sure what happend there, I was on weight when I left the hotel!"

All 22 of the other fighters on the card successfully hit their marks at the weigh-ins, which took place outside the Harley-Davidson Museum in Milwaukee.

Hardy is looking to snap a three-fight losing streak that started with a welterweight title fight loss to Georges St-Pierre last year. Lytle is coming off his first loss in five fights, a decision setback to Brian Ebersole in February. Both men have said they want to put a Fight of the Night-type performance on, promising to stand in the pocket and trade.

Jim Miller and Ben Henderson fight in the co-main event, an important bout that might determine the next top contender in the lightweight division. Miller comes in on a seven-fight winning streak, tops in the UFC outside champions St-Pierre and Anderson Silva. A win is likely to assure him a shot at the Frankie Edgar-Gray Maynard rematch winner in October. Henderson, the former lightweight champ in the WEC, won his UFC debut in April against Mark Bocek. And while an upset of Miller wouldn't likely get him a title shot, it would throw a wrench into the division. Though for the second straight fight, Henderson had to strip down to make his mark, he eventually weighed in at 156. Miller came in at 155.5.

Also on the main card, Donald Cerrone and Charles Oliveira had one of the afternoon's more intense staredowns after leaving the scale, though they did shake hands. Cerrone said Friday he finds his opponent to be cocky thanks to a smirk he gave him earlier in the week. Cerrone has won four straight in the lightweight division – two to close out his WEC career and his first two as part of the UFC. The former WEC star won five Fight of the Night bonuses with that promotion, and a third straight UFC win would likely elevate his name into future title talk. Cerrone was 156; Oliveira weighed 155.

The complete weigh-in results are below:

* Hardy missed weight on his first try. After removing his trunks, he was still 171.5. On his third try, after the official weigh-in event, he made 170.