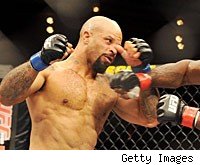 MMA Fighting has MMA Fight Pit: Genesis results live for the pay-per-view event that is taking place at "The Pit" in Albuquerque, N.M.

In the main event, Houston Alexander squares off against Razak Al-Hassan, while former UFC champion Jens Pulver takes on Coty Wheeler in the co-main event.

Check out the MMA Fight Pit: Genesis results below.