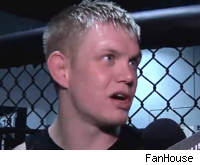 Browning lost by first round submission Saturday night at MMA Fight Pit Genesis, tapping out when Jacob Clark got on top of him and started raining down punches and elbows. It was the kind of loss that calls into question whether Browning really wants to be a fighter at all.

Clark did a nice job of avoiding Browning's early submission attempts and eventually got on top of Browning on the ground and started pummeling him, and Browning didn't have much of an answer: He covered up at first, and then tapped out when the elbows started connecting.

The official time of the stoppage was 4 minutes, 18 seconds of the first round.

Browning weighed in at 162.25 pounds -- a whopping 7.25 over the lightweight limit -- and was noticeably chubbier than he had been on The Ultimate Fighter. He doesn't appear to be committed to MMA.

The victory was a solid one for Clark, who improves his record to 9-3. But the real story is that Browning, who was once the focal point of the UFC's reality show, now looks like he has no business in the cage.