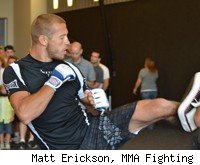 MILWAUKEE – Donald Cerrone may not have been more riled up any time in his career than he was before his rematch with Jamie Varner last September.

"Cowboy" seethed through his post-workout interviews at WEC 51. He got right in Varner's face at the weigh-ins. And he then tore right through his old nemesis in the fight.

Cerrone said then that fighting angry was something he had no problem doing. Against Charles Oliveira on Sunday at UFC on Versus 5, he doesn't have nearly the same level of animosity. But that doesn't mean he won't try to seek it out to give him an advantage when the Octagon door closes.

"I can't wait to get in the ring and see his cocky (butt) standing across from me," Cerrone said Friday after a workout at the Harley-Davidson Museum in Milwaukee. "I saw him looking at me the the other day smirking, and that, to me, is cocky. I'll smirk in the ring, you smirk back. I fight better angry."

Cerrone (15-3, 1 NC, 2-0 UFC) has put together a respectable four-fight winning streak, all in dominant fashion. He closed out his WEC career with a win over Varner and a submission of Chris Horodecki at the promotion's swan song show in December. He opened his UFC career, post-merger, with a submission of Paul Kelly in February and a kickboxing clinic decision over Vagner Rocha in June – that Cerrone said he wasn't fond of his performance in that fight.

A self-described "slow starter," Cerrone said he looks back on the rage he experienced before his rematch with Varner last year and is trying to channel it for Oliveira (14-1, 1 NC, 2-1 UFC, 1 NC).

"I try to get my mind in the same mindset as I had for Varner because when I fought Varner ... there was nothing he could have done, in my mind, to beat me. I was invincible," Cerrone said. "Getting myself back in that mindset where no one can touch me, that's what I'm looking to get back to. What did I do, mentally, to get in that mindset? ... This guy has nothing for me. What am I gonna do? That's the mindset I'm in for this fight. There's blood in my eyes, and I'm ready."

With fellow lightweights Jim Miller and Ben Henderson fighting one spot up the card, and Miller's seven-fight winning streak putting him in line for a possible title shot, Cerrone said getting a title shot isn't something that is realistically on his mind. (Though he did joke that a Miller loss to Henderson would mess up the UFC's possible plan, and he'd gladly take a crack at the title in that instance.)

Instead, Cerrone, who had five Fight of the Night bonuses in his 10 career WEC fights, and already has one in his two bouts in the UFC, is happen to put on crowd-pleasing performances every time he steps in the cage.

"Just go in there and fight, man," Cerrone said. "Go in there and fight your (butt) off, like you've got nothing to lose. That's what people want to see. They want to see you sit in that pocket and throw down and just take punches and give 'em right back. That's fun. That's when it's a good time. Sh-ttin' and gettin' and goin' hard. I hope this weekend, we can do that."

Cerrone and Oliveira fight on the main card of UFC on Versus 5 at the Bradley Center in Milwaukee. The main card airs live on the Versus cable channel at 9 p.m. Eastern on Sunday.