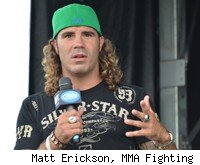 MILWAUKEE – The logjam in the UFC lightweight division thanks to the Frankie Edgar-Gray Maynard draw has been far-reaching.

Clay Guida knows plenty about it. He's been on one of the division's best tears, with four straight wins. But if he wants a title shot, he's got to wait until the dust finally settles.

After dismantling Anthony Pettis in June, Guida positioned himself for a possible title shot. But he believes Jim Miller is ahead of him in line, and he has no problem waiting for his moment to come.

"Jim Miller is the frontrunner, and maybe Ben Henderson – we'll see what happens tomorrow night," Guida said Saturday during a fan Q&A in Milwaukee. "I'm not in a rush. I'll be (in the UFC) five years in October. When the time comes, we'll be ready and it'll be the most exciting lightweight title fight you've ever seen."

Miller and Henderson fight in the co-main event of UFC on Versus 5 in Milwaukee on Sunday. Miller's seven-fight lightweight winning streak has him likely next in line for the Edgar-Maynard winner, but a Henderson upset could throw a wrench in the works – and could open the door for Guida.

Guida said he does not yet have his next fight booked – perhaps a strategic move on the UFC's part, waiting to see what happens between Miller and Henderson.

But Guida has no qualms with saying Miller is ahead of him in line – even though Miller hasn't been named the official next title challenger yet.

"Jim Miller's just been a wrecking ball," Guida said. "He ran through Kamal Shalorus, which I thought would be his toughest test. It's an interesting matchup. I've won four in a row, but right now Jim Miller is the frontrunner for next contender. But don't sell Ben Henderson short. He's a gamer."