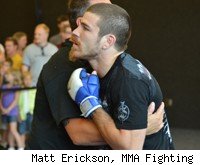 MILWAUKEE – Jim Miller can join the club when it comes to being frustrated with the UFC's lightweight title situation.

Only three fighters have been in the race for the last 18 months – BJ Penn, Frankie Edgar and Gray Maynard. Penn lost to Edgar, then got a rematch, which Edgar won. And Edgar and Maynard's January draw forced a rematch for this October, when both will have recovered from training injuries.

Meanwhile, Miller sits in a pack with the likes of Clay Guida and, before him, Anthony Pettis, wondering when's gonna be his time. With a seven-fight winning streak going into his co-main event fight against Ben Henderson on Sunday at UFC on Versus 5, Miller is ready for eight to be enough to get him the winner of Edgar-Maynard. And if not? He'll keep doing what he's doing.

"I can't look past any of my opponents," Miller said Friday after a workout in Milwaukee. "I feel that I'm ready to be recognized as the best lightweight in the world. I kind of have my opportunity to prove it. Anybody they put in there against me, I'm going to be able to beat. Hopefully this is the one, but we'll see. We'll see the way it goes and see what happens down the road."

Miller (20-2, 9-1 UFC) hasn't lost since a unanimous decision setback to Maynard at UFC 96 in March 2009. His only other pro defeat? It's rather perfect that it came at the hands of Edgar, losing the New Jersey-based Realty Fighting lightweight belt.

His seven-fight tear through the UFC since his loss to Maynard includes four stoppages, including a TKO against Kamal Shalorus in March and a Submission of the Night win over submission specialist Charles Oliveira last December.

And even though seven straight wins in the lightweight division would normally be enough to get a crack at some gold – the only longer current streaks in the UFC belong to champs Georges St-Pierre and Anderson Silva – the alternative of sitting on the sideline hoping he gets a shot later hasn't really appealed to him, either.

"I'm here to fight the best, and I know I can beat anybody in the world," Miller said. "Basically, I'm just getting opportunities to show it. The way the title picture has worked out these last couple fights, with BJ and Frankie, and now all the stuff going on with Frankie and Gray, you can't expect anything. You just have to wait it out and let those guys settle it. In the meantime, I've been happy taking these fights and fighting tough guys and working my butt off so I can beat them."

Against Henderson, Miller gets an opponent who perhaps has a little something extra to prove on Sunday. Henderson (13-2, 1-0 UFC) was lightweight champ in the WEC, and Miller was critical of the WEC's lightweights when they merged into the UFC at the start of this year – believing they were a second tier of competition to their big brothers in the bigger show.

And though he may not be ready to take back completely what he said, he does admit Henderson proved himself worthy of UFC lightweight status with his win over Mark Bocek at UFC 129 in April.

Miller also has a win over Bocek at UFC 111. But the New Jersey-based fighter said if Henderson is only using their mutual fights with Bocek for comparison, he's in trouble.

"He definitely fought Mark a lot more conservative than I did," Miller said. "I know that if I had tried to stall it out on the mat, I could've done it. But I wanted to sub him out. I put him in danger a couple times. But time has passed. I think if Ben thinks he is fighting the same Jim Miller that fought Mark (in March 2010), he's going to be in for a rude awakening on Sunday night."

Miller and Henderson fight Sunday in the co-main event of UFC on Versus 5 at the Bradley Center in Milwaukee, Wis., the UFC's debut in the state. The main card airs live on the Versus cable channel at 9 p.m. Eastern.