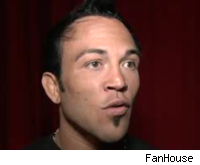 Strikeforce has received more attention recently for what's going on outside the cage -- and who's being cut from the promotion -- than for the actual fights. But we'll turn our attention now to what's actually going on inside the cage, as Strikeforce returns on Friday night with its latest Challengers card, featuring a main event of Jorge Gurgel vs. Joe Duarte.

What: Strikeforce Challengers: Gurgel vs. Duarte

When: Friday, the Showtime televised card begins at 11 PM ET.

Jorge Gurgel vs. Joe Duarte
Duarte is currently riding a four-fight winning streak and finished all four opponents in the first round, but Gurgel represents an enormous step up in competition for Duarte. The 34-year-old Gurgel fought seven times in the UFC and is now heading into his fifth fight in Strikeforce, and he feels a little out of place in Challengers, which is supposedly for younger and less experienced fighters. Both Gurgel and Duarte are better on the ground than they are on their feet, but I expect Gurgel to turn this into a slugfest and win a decision.
Pick: Gurgel

Danillo Villefort vs. Nate James
Since losing his first and only shot in the UFC two years ago, Villefort has gone 4-0, including a couple of very good performances on a couple of Shark Fights cards, beating Joey Villasenor and Matt Horwich. The 12-7-1 James is a step down from Villasenor and Horwich, so Villefort shouldn't have too much trouble winning this one.
Pick: Villefort

Pat Healy vs. Eric Wisely
The 28-year-old Healy already has 43 pro fights on his record, including a win over Lyle Beerbohm in the main event of a Challengers card in February. The 27-year-old Wisely is 17-5 and has beaten some solid opponents, including beating Hermes Franca twice last year in Franca's first two fights after being cut by the UFC. I think Healy wins a decision.
Pick: Healy

Ronda Rousey vs. Sarah D'Alelio
The women's fight is the most interesting fight on this card. Rousey is a judo Olympian who turned pro in MMA this year and is 2-0, and I think she's going to be too big and strong for D'Alelio, who's 4-1 and coming off a loss to Julie Kedzie.
Pick: Rousey

Roy Jones vs. Derrick Mehmen
Jones, who is not related to the boxer of the same name, has torn through most of his opponents while fighting in small Iowa promotions: He's 6-1, with all six wins lasting less than 90 seconds. Mehmen is also a veteran of small Iowa promotions, and although I think he'll last longer than 90 seconds with Jones, I think he'll get stopped.
Pick: Jones