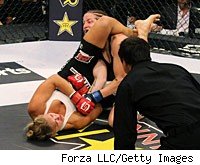 Instead, the story of the fight was that referee Steve Mazzagatti stopped the fight even though D'Alelio didn't tap out.

Rousey used her world-class judo technique to take D'Alelio down and sink in an armbar at the start of the first round, but D'Alelio seemed poised and ready to fight off the arm bar, and she did not tap out. Surprisingly, Mazzagatti stepped in and stopped the fight anyway.

Afterward, Rousey and D'Alelio offered differing accounts of what happened: Rousey claimed that D'Alelio verbally submitted by saying, "tap, tap." D'Alelio said she did no such thing. Mazzagatti did not give a post-fight interview to explain what happened.

UFC President Dana White has called Mazzagatti the worst referee in MMA, and Mazzagatti has been widely derided by MMA fighters, media and fans. This incident will do nothing to change that.