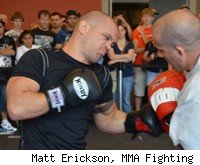 MILWAUKEE – There are workaholics, and then there is Chris Lytle.

When he's not training for a UFC fight – and going into his 20th with the promotion, he's among the all-time leaders – he's working as an Indianapolis firefighter. And he recently said when he stops scrapping in the cage, he wouldn't mind taking a stab at Indiana state politics – he even put an exploratory committee together to see how he'd fare in an election. Then there's his family, with four kids.

It would occur to most people to wonder, geez – does the guy ever take a break? Maybe not retire just yet, though Lytle will turn 37 next week. But just stop going for a few days?

"After this last fight, I had a lot of injuries and that was one of the things I was contemplating," Lytle told MMA Fighting on Friday after a short workout in Milwaukee, where he'll fight Dan Hardy in the main event of UFC on Versus 5 on Sunday. "I don't want to keep fighting if I can't perform like I've been doing. So I took some time off, hung out with the family a little bit and let my body heal up. I actually got to relax a little bit – it was pretty cool. I had about a month where I didn't do too much. That's a rarity."

Right now, what's on Lytle's mind is getting back in the win column. In February, his name was being tossed around as a possible title challenger for Georges St-Pierre's welterweight belt. His four-fight winning streak, while not overwhelming, was the kind of run that if it hit five, then six, a title shot would have been realistic.

But then Brian Ebersole came along. He pulled one of the year's biggest upsets in front of his home Australian crowd, taking the fight on short notice and sending Lytle back into the middle of the pack at 170 pounds. Lytle said everything about that fight at UFC 127 felt wrong.

"That was a lose-lose situation for me," Lytle said. "I knew I wasn't physically where I should be, and I knew nobody knew who this guy was. Unless I went out there and knocked him out in 30 seconds, everyone would say, 'Chris didn't look good tonight.' And I knew I wasn't going to do that – no one's ever knocked him out, he's a good wrestler, he hasn't lost a fight in five years. I knew he was going to be tough, and there was very little to gain. I knew I had a lot working against me."

Against Hardy (23-9, 1 NC, 4-3 UFC), Lytle is back in the type of fight he loves the most – the potential for a good old fashioned scrap. That's what Hardy has been practically begging for since he was "punked" by Anthony Johnson in March. Hardy claims Johnson told him personally he wanted to have a knock-down, drag-out slugfest of a fight, then wrestled his way to a decision victory.

But Lytle again on Friday said Hardy has very little to worry about in that department. After all, you don't win eight UFC fight night bonuses by fighting safe and playing for points with the judges.

"I do take a lot of pride that the UFC has put us in the main event," Lytle said. "I know they do that for a reason – they want fireworks. They want a fight people want to see. These are the kinds of fights I want. There's no thought in my head of pulling an Anthony Johnson. I got to get that W, but I'd rather lose the fight than win it like that."

Though Lytle admits to giving some thought to hanging up the gloves after his loss to Ebersole, he said it will be his body that will dictate how long he stays in the game. And even though he had to go back to Square One in the title picture after the loss, he wouldn't put a title run down the line beyond the realm of possibility for him.

"I feel that if you go out there and just grind it out to try and get a title, you're going to have to win eight or nine fights in a row to get a title fight," Lytle said. "If I go out there and just put on great fights – and I'm trying to win all of them – and win in spectacular fashion, it's not going to take eight fights. It's going to take a few. I feel like I'm still on the radar, and if I get a couple wins ..."

Lytle has time for very little in his schedule, but he'd make time for one last run at a UFC belt.

Lytle and Hardy fight in the main event of UFC on Versus 5, which airs Sunday at 9 p.m. Easter on the Versus cable channel.