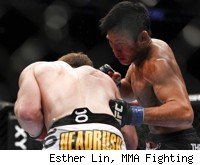 One featherweight in dire need of a win will take over for another in similar standing.

Nam Phan will look to end a two-fight losing streak in the UFC when he steps in as a replacement to face Matt Grice at UFC 136 on Oct. 8 in Houston, Texas, the UFC has announced.

Grice's originally scheduled opponent Josh Grispi recently withdrew from the preliminary bout. Entering the UFC earlier this year as a No. 1 contender for Jose Aldo's belt, Grispi has since lost both his UFC fights to Dustin Poirier and George Roop.
Phan (16-9) is looking to hold onto his spot on the roster after falling to Leonard Garcia in a highly controversial decision and losing last weekend against Mike Brown. He's a mainstay in the California MMA scene and is a Brazilian jiu-jitsu standout.

Grice (13-4) returned to the UFC in June and lost via first-round TKO to Ricardo Lamas. In his previous stint with the UFC, Grice compiled a 1-3 record from April 2007 through July 2009. This UFC 136 fight will be the former University of Oklahoma wrestler's second try at 145 pounds.

UFC 136 features a stacked card with two championships on the line; Frankie Edgar vs. Gray Maynard and Jose Aldo vs. Kenny Florian. The main card will also be filled out by Chael Sonnen vs. Brian Stann, Mike Russow vs. Dave Herman and Melvin Guillard vs. Joe Lauzon.