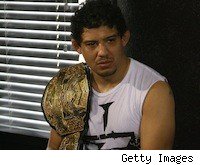 Gilbert Melendez's desire to fight in the UFC will have to wait. The Strikeforce lightweight champion will square off with Jorge Masvidal in his next title defense, which will take place in the fall, according to Melendez's trainer Cesar Gracie.

In a Friday interview, Gracie told MMA Fighting that a date had not yet been decided upon, but that the camp had been informed of the championship pairing.

Strikeforce has not yet announced any events past September, but it is not expected to host any major events in October, making November or December the likely target for the bout.

The fight comes as no surprise. It had previously been rumored after Strikeforce CEO Scott Coker called the winner of June's Masvidal vs. KJ Noons fight a "frontrunner" to face Melendez. Masvidal won the bout via unanimous decision.

In his most recent bout, Melendez returned after a one-year layoff to crush the "Crusher," Tatsuya Kawajiri, in a 3-minute, 14-second TKO. The victory was the fifth straight for Melendez, who improved to 19-2.

Afterward, he spoke about the possibility of moving over to the UFC like teammate Nick Diaz, but it appears that possibility has been shelved for the time being.

Masvidal's win over Noons in June was his second straight win and third in his last four outings. The victory helped him improve to 22-6.