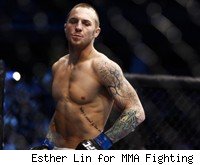 After Eddie Wineland had his four-fight winning streak snapped against Urijah Faber in March, he took an interesting next step.

Rather than taking the positives from a fight he kept much closer than most people predicted, regrouping and taking on someone down the bantamweight ladder to start a new streak, Wineland asked for an opponent maybe tougher than his last – Joseph Benavidez.

Before thinking Wineland might not have his head on straight – after all, he asked for the teammate and primary training partner of his last opponent, ensuring Benavidez would have plenty of knowledge about him built up from Faber's training camp – one must listen to his logic. Having once held the bantamweight belt for the WEC, now the UFC strap, getting it back is the one thing he wants most.

"I could have easily fought one of the top five, six, seven guys, and that would've got me back on track," Wineland said. "But a win over Joseph, I think, puts me right back into title contention. It's a gamble, but I don't need to be fighting guys who are up and coming and looking to get their names out there."

Wineland (18-7-1, 0-1 UFC) had back-to-back Knockout of the Night bonuses to close out his WEC career before getting his matchup with Faber. And though he won the first round on the judges' scorecards at UFC 128 – stopping multiple Faber takedown attempts and landing a slam of his own to the surprise of nearly everyone but Wineland – he couldn't keep Faber at bay long enough in the second and third. Faber went on to get a title shot – a shot that UFC president Dana White said afterward he'd have to have given to Wineland had he won.

With Dominick Cruz locked down on the No. 1 spot in the bantamweight class, Wineland sees plenty of lists with Benavidez (14-2, 1-0 UFC) as the No. 2 guy. Benavidez's only two career losses? To Cruz, of course. But Wineland wants to dispel the myth that asking for Benavidez was a call-out of any kind. He wanted another major test, more than anything.

"I always said that Benavidez poses a lot of problems for me since he's a good wrestler and he's really fast, very scrambly," Wineland said. "He's ranked top two or three in most all the rankings. In the beginning, he felt like I called him out – when it's not coming from the horse's mouth he's going to hear something different. Not that I called him out, but I asked for the fight because that's my fastest path back to the belt."

Wineland was a heavy underdog against Faber, and he'll enter the fight with Benavidez at UFC on Versus 5 on Sunday in Milwaukee, just a couple hours' drive from his home in Northwest Indiana, as a 2-to-1 'dog.

Wineland will have a reach and height advantage of several inches against Benavidez, but he remembers how his opponent caught the bigger Miguel Torres not long back – the same Torres that Wineland once trained with. Wineland said he looked at Benavidez's losses to Cruz more than anything else, and he wonders if he might have some of the same Benavidez Kryptonite that Cruz seems to possess. If he does, he believes an upset is in the offing on Sunday.

"I think Dominick and I have similar movements in the sense we move side to side and not forward and backward," Wineland said. "I think ultimately, my natural movement is what's going to give me the win. I think they think they're going to come in and fight the same Eddie Wineland that Urijah fought, and that's not going to happen. Every fight, I change. I get stronger. I get faster."

And that size difference of 5-foot-7 vs. 5-4? If it gives Wineland that little extra mental boost for himself, he'll take it.

"When we're in the gym and I'm sparring with shorter guys, my confidence seems to grow," Wineland said. "Not so much the fact that I'm looking down on them ... but I am looking down on them. I think it gives me that confidence factor and helps me to push forward and realize that, hey, this guy's a kid – he looks like a kid. So I can't let this kid come in here and beat me. I just have to think child abuse, I guess."

But that's not a call out.

Wineland and Benavidez fight as part of the preliminary card of UFC on Versus 5 on Sunday at the Bradley Center in Milwaukee, Wis. Their fight will air as part of a live stream on the UFC's Facebook page, with the first fight starting at 5:45 p.m. Eastern. The main card, featuring a welterweight bout between Dan Hardy and Chris Lytle, airs live on Versus starting at 9 p.m. Eastern.