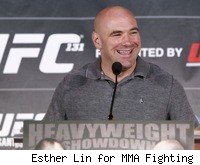 There are 37 cable networks that air in over 95 million U.S. households. Both are huge numbers, and it seems to give the UFC many possibilities for a home for its Ultimate Fighter franchise as well as occasional events. But a closer look reveals a much smaller number of potential broadcast partners, highlighting the intriguing behind-the-scenes maneuvering for a future deal.

Of the group, many networks specialize in categories that would immediately preclude their interest. Whether it's news nets like CNN, kid-focused programmers like The Disney Channel, or channels that target female-based demos like Lifetime, 30 of the channels can almost immediately be eliminated from an interest in broadcasting the UFC.

That leaves us with a few possibilities among the group of dense coverage networks: Spike, FX, TBS, TNT, USA, ESPN and ESPN2.

USA
USA can likely be eliminated as a possible landing spot for several reasons. One is their longstanding relationship with WWE. Though not impossible, it's unlikely they would be in business with both WWE and UFC. Also making it unlikely is USA's general disinterest in sports properties. Among the only sports broadcast by the channel since 2004 are Olympic sports that are part of NBC's rights package. Once every four years isn't much of a commitment.

SPIKE
Given its long history with the UFC, the promotion's original home may also be its best current available option. The channel has always shown a willingness to tailor their schedule around the UFC's needs, and it is also Spike's No. 1 sports property.

While there were recent rumblings that Spike would alter its target demos to reach more women, on Thursday, the network announced a spate of four new shows, all of which are clearly aimed at the usual demo. Given that, UFC would still fit perfectly within their philosophy if they can put aside early negotiation issues and strike a deal.

FX
After several years of building the channel as a home of edgy, original series, FX recently declared its intention to re-enter the sports world (it hadn't broadcast any type of sports competition since 2006) when it announced a package of 13 college football games beginning in the fall.

According to various reports from media watchers, sports have become a bigger priority for FX's parent company News Corp since around 2009. But the UFC deal comes with some built-in scheduling difficulties, because attached to it comes TUF, and a commitment to 26 one-hour episodes during the year. For a channel that is heavy on original programming, that is a tall order.

While there have been reports that TUF would find its home on FX sister station FUEL, that seems quite unlikely. The show's purpose is to build new stars and help publicize upcoming events, something that would be difficult to do on a channel that is only available on one-third the homes of FX. FUEL is currently found in only 32,148,000 households.

While the potential to host events on the FOX network might ultimately prove a tempting counterbalance to that problem, it is just as likely to prove too big an obstacle to overcome. If TUF is not aired on FX, a deal seems unlikely to happen.

TNT/TBS
TNT and TBS have hardly been mentioned as possibilities for the UFC, though parent company Turner Broadcasting does have a sports division, with current rights to the NBA, NCAA's men's basketball, Major League Baseball and NASCAR.

TBS does not seem like a natural fit due to its focus on comedy, but TNT -- a more general interest network -- offers a more realistic option for UFC events. And if the company was truly interested, it could offer TUF on sister station Tru TV, a channel which is heavy on crime-based reality shows but has searched for broader programming over the last two years. Still, Turner is not currently considered to be a serious contender for UFC rights.

ESPN/ESPN2
There is at best an outside chance that ESPN or ESPN2 gets involved. The sports giant is constantly seeking out new sports properties, and during the network's Upfront presentation in May, its executive vice president of content John Skipper acknowledged an interest in UFC. One potential roadblock though, would be the UFC's insistence to self-produce its events. Not surprisingly, ESPN believes that no one can produce sports better than they can.

Versus/NBC Sports Network
Of course, the UFC already has a relationship with Versus, the Comcast-owned cabler that now regularly hosts four events per year and will soon be rebranded NBC Sports Network. If Versus has one downside, it is its coverage area. The channel is available in 76,155,000 homes, nearly 25 percent fewer than Spike. But the Versus relationship does have a silver lining that Spike can't match: NBC. The Peacock network is also owned by Comcast. That is important because the UFC has continually stressed the importance of a strategic partner that can help them grow the brand.

"What we don't need is for somebody to just put us on a time slot, like a sitcom, and then not do anything else," UFC executive vice president Lawrence Epstein recently told Sports Business Daily. "What we want is a partner to promote us across all those assets that a major broadcast network has. They've all got a morning show. News magazine shows. Cable channels. All the things they can use to cross-promote. If you get the right package of assets, you can help the sport grow."

If that is indeed a priority, the pairings of FOX/FX and NBC/NBC Sports Network best fit the bill.

G4
While briefly discussed as a takeover target and eventual home of the UFC, that possibility seems more distant by the day. It is a proposition that would require so much time and money, it may distract UFC from other, more important goals. The one plus is that like Versus/NBC Sports Network, it is also a Comcast-owned channel and could include the NBC platform.

The UFC's decision is soon to be made. Will they prize a deal with a broad reach like NBC/NBC Sports Network, or one that is easily amenable to all their broadcast needs, like Spike? Or will they, like most other major sports leagues, go with a multi-tentacled approach and split up their TV rights across multiple TV partners?

There are other possibilities, like a dark horse candidate emerging. We focused on the major cable outlets, but premium cable channel HBO had interest in UFC several years ago. With longtime HBO sports president Ross Greenburg -- a longtime opponent of MMA -- now gone, that channel could get back in the hunt to broadcast events.

This is the tricky TV landscape UFC is forced to navigate while the clock continues ticking. A change would require time for advertising and promotion. A change will require time. With just over one month until the start of the next season of TUF, it is a commodity running in short supply.