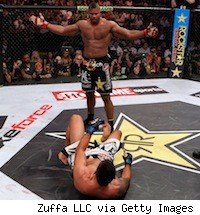 Despite the rancor between Golden Glory and the UFC, which resulted in several of the Dutch promotion's fighters being released from their Zuffa contracts, top Golden Glory star Alistair Overeem is still interested in signing an exclusive deal with the UFC.

That is one of the revelations in a statement that Golden Glory co-owner Bas Boon released on Thursday.

"We just want to be able to produce great fighters and create great fights for the fans," Boon said in the statement. "We have no intention for co-promotion deals and are even willing to make an exclusive deal for Alistair Overeem to fight in the UFC, if the terms are right."

What exactly the right terms would be is not clear, but one thing Boon did make clear is that he takes issue with UFC President Dana White's statements about Golden Glory's payment policies. White said the UFC wanted to pay fighters directly and was uncomfortable with Golden Glory's policy of serving as a middleman for fighter payment, but Boon said Golden Glory is fine with Zuffa paying Overeem, Marloes Coenen, John Olav Einemo and any of its other fighters directly.

"The payment was done how the UFC wanted," Boon said in the statement. "I do not understand why Danna [sic] claims we did not agree? We did not have a choice and never said we would not fight in the future or that we would refuse to work like this in the future (we worked out that problem with the Zuffa lawyer in the Vancouver and even agreed with their new sponsor policies). Maybe there is a miscommunication and Danna [sic] was not well informed that the direct payment issue was solved and no longer an issue."

Boon also placed some of the blame for the problems between Golden Glory and Zuffa on Strikeforce's Scott Coker.

"I introduced Scott through a partner of mine in L.A. to some powerful people in the U.S. (Scott was very surprised after this meeting and exited and mailed me after his meeting with these people how impressed he was). I never could have guessed that at the same moment I was talking to Scott to make a massive move for becoming a real competitor to the UFC, Scott was already talking with the same UFC for selling Strikeforce," Boon said in the statement. "I trusted Scott with some business plans. ... The problems with Strikeforce was that we made some agreements with Scott which were creating headaches now Zuffa took over."

Those headaches, according to Boon, are a major reason that Golden Glory's fighters are having problems with the UFC. But Boon is still hoping those problems will be resolved. And a resolution could result in Overeem inside the Octagon.