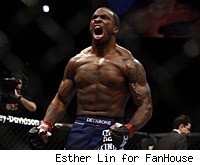 DREAM.17 picked up another bout on Friday morning as UFC veteran Gerald Harris announced via Twitter that he has agreed to fight Pride and UFC veteran Kazuhiro Nakamura at Saitama Super Arena in Japan on September 24.

Gerald Harris (18-4) was controversially cut from the UFC after a frustrating decision loss to Maiquel Falcao - a bout in which both fighters were criticized for a lack of activity. The loss was his first under the Zuffa banner, having previously scored three consecutive knockouts including two "knockout of the night" bonuses. Following his release from the UFC, Harris dropped a decision to James Head and most recently picked up a decision victory over Anthony Ruiz.