After Layoff, Jacob Volkmann Ready for Return - and Still Has Beef With Obama 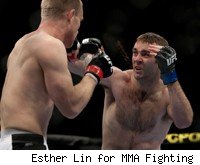 As a professional fighter, Jacob Volkmann will likely have many stories to tell his grandkids. But none will be stranger than the one about his visit from the Secret Service.

The story is now well known – it got a mention from Jay Leno. After his UFC 125 win, Volkmann, speaking to MMA Fighting's Ariel Helwani, called out President Barack Obama. On video. And the Secret Service took that seriously.

Volkmann has been on the sidelines since that fight. He finally returns Sunday against Danny Castillo – but he doesn't believe his run-in with the Obama camp, so to speak, is the reason he's been out of the cage.

"I think the merger with the WEC (is the reason why)," Volkmann told Helwani on Monday's edition of "The MMA Hour." "I talked to the PR guys at the UFC and they said keep it up. At least that's what they told me. I wasn't trashing (Obama) – I was being an honest American."


Volkmann was critical of Obama's health care plans – saying that as a chiropractor, aside from being a fighter, he had a vested interest in what was happening. Volkmann, in the interview with Helwani in January, said he wanted to fight Clay Guida. Then he relented and said: "Actually, Obama. He's not too bright. ... His health care plan – someone's gotta knock some sense into that idiot. ... I'm a chiropractor, so I know the health care situation – but he's making it worse."

Though Volkmann won't likely go down that road twice, should he win on Sunday in Milwaukee, he still was critical of the president on Monday when Helwani asked about his long layoff.

"Since I haven't fought, I have less income and more debt," Volkmann said. "What can you expect when you're spending so much money on worthless stuff, like Obama's salary?"

Volkmann (12-2, 3-2 UFC) has won three straight – two by split decision since starting his UFC career with a pair of losses to Paulo Thiago and Martin Kampmann. Against Castillo (11-3, 1-0 UFC), a UFC veteran who also rides a three-fight streak, Volkmann is expecting a stiff test.

"From what I saw, he's a goer and will be throwing a lot of haymakers," Volkmann said. "I don't know if he'll try to take me down, but who knows. I want to go to the ground with him."

And if he wins, he said he won't call out Obama again – but does plan to drop a name.

"I can't really give out hints ... I'm not gonna tell you who I'm calling out," Volkmann said. "It's not political, though. No beef. He asked me to."

Volkmann and Castillo fight on the preliminary card of UFC on Versus 5 on Sunday at the Bradley Center in Milwaukee. The prelims will stream live on the UFC's Facebook page starting at 5:45 p.m. Eastern. The four-fight main card airs live on Versus at 9 p.m. Eastern.