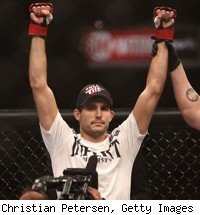 Ryan Couture will look to get back on the winning track when he steps in the cage at Strikeforce Challengers 19 on Sept. 23 in Las Vegas.

The 28-year-old Couture (2-1) suffered the first blemish of his professional career in June when he was outpointed by Matt Ricehouse after three rounds at Strikeforce Challengers 16.

The lightweight prior to the fight recorded two submissions on Challengers cards. As an amateur, Couture compiled a 5-1-1 record.

An opponent for Couture is to be announced.