MMA Top 10 Light Heavyweights: A Tough Call at No. 2 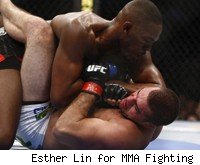 Jon Jones is the undisputed champion of the light heavyweight division, but figuring out who deserves to be No. 2 at 205 pounds is tough.

Is it Rampage Jackson, who gets the next crack at Jones' title? Is it Shogun Rua, the previous champion? Is it Rashad Evans, who beat Jackson? Is it Lyoto Machida, who beat Evans? Is it Dan Henderson, who ran through the Strikeforce light heavyweight division and then beat an opponent who outweighed him by 16 pounds in Fedor Emelianenko?

Good arguments can be made for any of them. So who do I have at No. 2? Find out below.

Top 10 Light Heavyweights in MMA
(Editor's note: The fighter's ranking the last time we did light heavyweights are in parentheses).

1. Jon Jones (1): Jones was in Denver on July 19, his 24th birthday, for a press conference promoting his upcoming fight with Rampage Jackson. Jones said several times that now that he's 24 he doesn't think anyone should call him young anymore, but the reality is that Jones is both the best fighter in the division and the youngest in the Top 10. His age is an important part of why people are so excited about what he can do: He could be a long-reigning champion in a division that has seen a great deal of turnover at the top.

2. Rashad Evans (4): Evans' impressive victory over Tito Ortiz at UFC 133 moves him back up to No. 2 in my book. Evans looked as good as he's ever looked, and it was especially noteworthy that he looked physically stronger than he ever had before. The way he picked Ortiz up and slammed him down with a minute left in the first round was particularly impressive. Whether Jones or Jackson is the light heavyweight champion after their UFC 135 fight, Evans will be a very worthy opponent.

3. Shogun Rua (2): We'll learn a lot about Shogun when he takes on Forrest Griffin at UFC 134. If Rua can avenge the loss to Griffin from four years ago and come out of the fight healthy, he'll be in the mix (as Dana White likes to say) for a shot at the light heavyweight title some time in 2012. But Rua's knees have given him so many problems that it's hard not to wonder, even though he's only 29, if he's on the down side of his career.

4. Lyoto Machida (3): Machida's decision to turn down a fight with Evans was a surprise, because Machida thoroughly whipped Evans when they fought two years ago. If Machida had accepted that fight and won, he'd probably be next in line for a title shot. Now he may be sidelined for an extended period of time, as most of the other top light heavyweights already have fights lined up.

5. Rampage Jackson (5): Jackson looked sluggish in his UFC 130 victory over Matt Hamill, and at age 33 he doesn't seem to have the punching power he once had: In the last four years, Rampage has fought 23 rounds inside the Octagon, and other than his knockout of Wanderlei Silva at UFC 92, he's never been particularly close to finishing anybody. If we're going to see an upset of Jon Jones at UFC 135, we're going to have to see a much better Rampage than we've seen recently.

6. Dan Henderson (6): Henderson is the Strikeforce light heavyweight champion, but his impressive win over Fedor Emelianenko was probably his last fight in Strikeforce: His return to the Octagon is likely coming soon. Machida would be a good opponent for him in his UFC return.

7. Forrest Griffin (7): Griffin will have a great chance to move up in the rankings when he takes on Shogun Rua at UFC 134. A win over Rua, whom Griffin has already beaten once, would vault Griffin into the Top 5 and probably put him only another win away from another shot at the light heavyweight title.

8. Phil Davis (8): A knee injury forced the 9-0 Davis to pull out of his scheduled UFC 133 fight with Evans, and there's no word yet on when he'll return to the Octagon. With five UFC wins in less than 14 months from February of 2010 to March of 2011, Davis had been building up a lot of momentum that this injury slowed down. But he'll be back and quite likely fighting for the light heavyweight title by the end of 2012.

9. Thiago Silva (9): Silva is currently serving a one-year suspension for using a banned substance and cheating on his UFC 125 drug test. Some will drop him from the rankings for that, but Silva's record (14-2 with 11 wins by knockout, two wins by submission and losses only to Evans and Machida) is strong enough that I don't think you can put together a list of the Top 10 light heavyweights without him.

10. Rafael Cavalcante (10): The former Strikeforce champion, Feijao will face a largely untested opponent, the 4-0 Olympic wrestling silver medalist Yoel Romero, in his return to the cage on September 10.