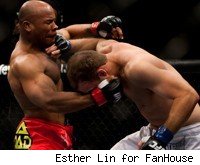 It's hard for a UFC fighter not to feel a little conflicted when he gets a Fight of the Night bonus for a fight that he lost. On one hand, losing sucks. On the other hand, getting handed a wad of extra money doesn't.

Just ask Jared Hamman, who's pocketed the bonus cash in each of his last two UFC fights, though he only won one of them.

"Any time you get a big, fat paycheck like that, you're like, thank you Lord," Hamman told MMA Fighting. "But I would take the win over the Fight of the Night money any day."

Perhaps what's most remarkable about Hamman's recent streak of bonuses is that both came in prelim bouts. The Fight of the Night check is more often handed out to main eventers, or least main card fighters, but his performances against Rodney Wallace and Kyle Kingsbury so impressed his boss that Hamman went home with the extra cash anyway.

Maybe that's good news, considering that he's booked for a bout with C.B. Dollaway on the prelim portion of Sunday night's UFC Live event in Milwaukee.

The bout will be Hamman's first since moving down to 185 pounds following the decision loss to Kingsbury at light heavyweight. The former Division III college football standout said he was motivated to make the drop after seeing how much size he was giving up to guys like Kingsbury, who typically walk around 25 or 30 pounds heavier than he does.

"When I got started in MMA, it was a hobby," said Hamman. "I just fought at the weight I was at. Being a football player, I always tried to gain weight. Even in my fight camps I would try to maintain this weight gain, because I could always cut it really easily. But after this last fight with Kyle, man, he was humongous. I started looking around at these other 205-[pound]ers and they're all huge. That's when I started thinking about going down to 185."

It helped that he was forced to take some time off to deal with an injury, Hamman said. It allowed him to do a practice cut to see how his body would respond, during which he tried to simulate the UFC experience as closely as possible.

"Weigh-ins are at four o'clock, you have so much time spent traveling to the event, all that, so I did that and I weighed in at four p.m. at 186 [pounds]. Then the next day, on Saturday, I did a fight scenario. I did three five-minute rounds, and I felt great. From there I just decided to go for it."

Now Hamman -- who usually clocks in at around 215 pounds -- will move down in weight to face Dollaway, who's coming off a knockout loss to Mark Munoz in March. And while a lot gets made of Dollaway's history as an All-American wrestler, Hamman said he isn't particularly worried that the bout will turn into a slow grind where no one has the potential to scoop up any bonus cash.

"Even though he has a wrestling background, I think the guy likes to fight. He likes to stand and throw punches and kicks and everything. He obviously also likes to do submissions and wrestling, but I think he's a fighter. I like to fight guys who aren't boring, who will come forward and fight me, and the UFC has done a good job of matching me up with guys who like to fight, and I enjoy that. I think this will be another one."

For Hamman, the move down in weight was less about looking for easier prey, he said, than taking the next step toward being a total professional. Cutting weight, adhering to a strict diet -- it's all part of finding out just how far he can go with his career inside the cage, he explained.

"This was just a hobby before. I love to scrap, to get in there and fight. And to me, I'm grateful that I get to do it at this level. But some things put it in perspective. Like my wife got into a car accident the other week -- and she's fine, not hurt or anything -- but it could have gone a lot worse. It reminded me, you're not always guaranteed to get that next heartbeat. You're not guaranteed to get that next fight. I've tried to hold that in my mind. It makes me take every fight and just go for it."