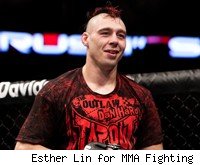 Dan Hardy will admit it – he pretty well blew it his last time out, dropping his third straight with a unanimous decision loss to Anthony Johnson.

The Brit said he wanted to put on an exciting fight, but instead didn't do his part to deliver, especially for his fans in the U.K. "I had a lot of people, especially over in the U.K. waiting up till early hours of the morning to watch a good fight – and I ended up having a nap for 15 minutes," Hardy said last week on a media call for UFC on Versus 5, which he headlines Sunday in Milwaukee against Chris Lytle.

Believing he has fallen victim in the past to lay-and-pray wrestlers – including Johnson in March – Hardy is hopeful his fight with Lytle won't be a carbon copy of the Johnson fight.

"Regardless of where the fight goes, I just don't want a boring fight," Hardy (23-9, 1 NC, 4-3 UFC) said. "There are a lot of wrestlers out there that use their wrestling really well in MMA – they use it aggressively, they win fights with it. Jim (Miller) is a great example. I just don't want a boring fight, and I don't think Chris has got that in him."

"They picked Dan and I to be the main event, and let me tell you something," Lytle said. "They didn't pick me and Dan to be there to put on a boring fight. So if you think I'm going to try to sit there and get him on the ground and hold him down for 15 minutes and then dry hump him, that's not going to happen."

Hardy may find himself in must-win territory against Lytle, who also is coming off a loss. After starting his UFC career with four straight wins, Hardy was thrust into a welterweight title fight with Georges St-Pierre. His loss last year started a three-fight skid that included Johnson in March and a knockout loss to Carlos Condit last October.

But Hardy says each of those three losses is explainable. A fourth straight, to Lytle on Sunday, might have him really searching for answers.

"Breaking each one of the three fights I lost down, every one of them was forgivable in a way," Hardy said. "Georges is the champ. He's one of the best in the world, and that was a fight where I just kind of went and gave it my best. ... The Condit fight was just my arrogance got the better of me. I just got caught there. That was my own fault. And the Anthony Johnson one, he's a big strong wrestler and it was just one of those days that sometimes you just don't win."

Hardy said he adjusted his training camp this time around, starting in Las Vegas, then moving to his Team Rough House in England, then returning to Vegas, where he trained with Roy Nelson, Evan Dunham and Gilbert Yvel, among others.

The UFC seldom keeps fighters on its roster with three straight losses, so Hardy is already in short company. A fourth straight setback, regardless of his popularity with the crucial U.K. fanbase, could be devastating.

"I just feel ready," Hardy said. "I feel that this is a turning point in my career. I've got to get things back on track, and I'm in the right place to do it."

Hardy and Lytle are the main event of UFC on Versus 5, which takes place Sunday at the Bradley Center in Milwaukee, Wis. It will be the UFC's debut in Wisconsin. The four-fight main card, which also includes an important lightweight co-main event between Jim Miller and Ben Henderson, airs live on Versus at 9 p.m. Eastern.