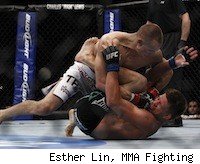 Last Saturday night, Rashad Evans fought like a man without a care in the world when there was plenty to care about. His game was equal parts fluidity and power as he finished the historically durable Tito Ortiz in the second round. The spectacular performance led to a rare moment of self-doubt from UFC president Dana White, a big believer in fighters suffering ring rust after long layoffs.

"Rashad kind of f----- my theory up a little bit," White said after the fight.

We know what's on the horizon for Evans: a chance to re-stake his claim as the king of UFC's light-heavyweights. But where does Ortiz go from here? And what about Vitor Belfort? We take a look at what might be next for some of UFC 133's key participants in this edition of The Forward Roll.

Rashad Evans
He becomes No. 1 contender with a bullet after his dominant win, and the winner of UFC 135's Jon Jones vs. Quinton "Rampage" Jackson fight awaits. Either way, the UFC gets a big money fight, but Evans wants Jones. Let's tentatively book that right now. With all due respect to Jackson, Jones is a more complete fighter these days and he should win.

Prediction: I'm thinking a January 2012 bout between Evans and Jones, which will be just enough time to ramp up the rivalry to a high-pitched frenzy.

Tito Ortiz
After two fights in 35 days, Ortiz is likely to take a nice vacation for about a month before contemplating a return. By then, many things can happen to affect who he might be fighting. Ortiz did mention that he will definitely fight before the end of the year though, so I'm going to slot him into a spot in UFC 140 when the promotion returns to Canada.

As far as who he'll be fighting, the UFC once matched him up against Antonio Rogerio Nogueira before an Ortiz injury scrapped the bout. Rich Franklin could be another possibility, or how about Mauricio Rua if he loses to Forrest Griffin at the end of this month?

Prediction: Nogueira is recovering from a shoulder injury, but if he can be ready by December, the UFC targeted Ortiz-Nogueira once, so it would probably interest them again. Plus, it's two guys coming off losses.

Vitor Belfort
Belfort has made no secret that he wants another opportunity to fight for the UFC middleweight championship, but he's going to have to be patient and win another fight or two first. Destroying Yoshihiro Akiyama in just 1:52 was a great first step back though.

If he wouldn't have to wait four months to see it get settled, Belfort might match up with the winner of December's Michael Bisping vs. Jason "Mayhem" Miller fight. That's simply too long to sit around collecting dust. Unfortunately for Belfort, most of the division's best fighters are already locked up in bouts. Wanderlei Silva could be a possibility but he hasn't even decided on his future, and if he does choose to come back, the UFC may gave him someone other than a crushing slugger.

Prediction: If Rousimar Palhares beats Dan Miller at UFC 134, that will make him 5-1 over his last six, and he'll get the spot. But there is a dark horse pick, Dan Henderson, a free agent who will speak with UFC brass this week and would offer an exciting matchup alternative. Don't be surprised to see it happen.

Yoshihiro Akiyama
While most thought it a sure thing that Akiyama would be cut upon losing to Vitor Belfort, it remains anything but. White offered no guarantee either way, saying only that he loves Akiyama's fighting style and spirit. But "Sexyama" fans should hold at least a glimmer of hope that he still has at least one more fight in his UFC future.

The company is entertaining the idea of bringing a card to his home country of Japan in 2012. Depending on how that idea is moving along, they could decide to keep him and give him one more chance.

Prediction: Few fighters get another opportunity after an 0-3 stretch, but Zuffa brass love his heart and will give him another chance. It will be a while until he returns, but a fight with someone like Jorge Rivera sounds about right.

Brian Ebersole
Fresh off his "getting-those-horrifying-shorts-off-TV-as-soon-as-possible" award, not to mention his second straight UFC win, Ebersole is riding high after a long career spent traveling the world. After beating two straight veterans with more than 50 fights apiece, it's time to see how the 30-year-old Ebersole does against the younger class.

Rory MacDonald
Historically, the UFC's welterweight class is its deepest and best, with the biggest and most diverse collection of talent. So far, MacDonald has done plenty to stand out with wins over Mike Guymon, Nate Diaz, Mike Pyle, and a near-win over Carlos Condit. Yet at 22 years old, MacDonald is still improving, a scary thought.

Coming off a quick win, MacDonald should get tossed back in the mix soon. And there's a high-quality welterweight salivating to get back in the cage. Sounds like a match.

Chad Mendes
Mendes was supposed to get a title shot after beating Michihiro Omigawa at UFC 126, but didn't get it after he decided not to wait for Jose Aldo to heal up an injury. Then, it was rumored he would get one if he beat Rani Yahya at UFC 133, but that seems to be no sure thing, either, as UFC brass weren't blown away by his performance.

Mendes would have to wait two months just to see who emerges from the Aldo vs. Kenny Florian title fight at the winner. At that point, UFC may just wait to see how highly ranked Hatsu Hioki does in his debut three weeks later.

I don't think they will do that to Mendes though. They'll let him know the situation within the next few weeks, and with a six-fight win streak, he'll get the title shot.

Alexander Gustafsson
The lanky Swede showed progression in his overall game by stuffing all three takedown attempts by the decorated wrestler Matt Hamill, then flashing his rapidly improving striking game to score a second-round TKO. Now 12-1, the 24-year-old Gustafsson has served notice that he's no longer content being under the radar.

There aren't many decent light-heavyweights available but there are two veteran currently on the injury list that expect to be back towards the end of the year. I think one of the two will get the call.