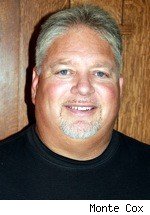 Veteran MMA manager and promoter Monte Cox is in talks with ProElite to become a consultant for the upstart organization.

Both ProElite's Vice President of Operations T. Jay Thompson and Cox confirmed with MMA Fighting that talks are ongoing but no deal has been struck just yet.

"I'm excited about the prospect of working with T. Jay and ProElite," Cox wrote via text message. "We've been friends for a long, long time and think we work well together. It would be fun to get in on the ground floor and help build something."

Cox has managed some of the biggest names in MMA, including Rich Franklin and Tim Sylvia. He entered the sport in 1995 and has also promoted close to 600 local shows.

The role being offered to Cox is simply that of a consultant. Should he accept, he would not have to quit his manager or promoter jobs and would not be involved in ProElite's matchmaking process.

"Monte and I have worked together on many projects through the years," Thompson said. "I would love to have him on board. He would be an incredible asset to the company

"He'll be in Hawaii for the ProElite show and maybe after taking his money on the golf course, if he's not too grumpy, we'll come to an agreement."

ProElite: Arlovski vs. Lopez is scheduled for Aug. 27 in Hawaii.