No Surprise: UFC on Versus 5 Prelims to Stream on Facebook 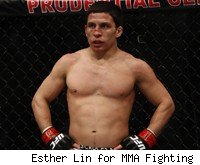 In what should come as no surprise in 2011, the UFC on Sunday will again offer preliminary card fights on Facebook.

Though the promotion has not yet made the Facebook fights official for UFC on Versus 5 on its website, sources close to the UFC confirmed to MMA Fighting plans for the live stream. UFC on Versus 5 takes place at the Bradley Center in Milwaukee, Wis. It will be the UFC's debut in the Badger State.

It will be the 14th straight event the UFC has shown previously unaired fights on the social networking site, dating back to January. And for the eighth straight time, each fight on the card will make its way to a broadcast of some type, as all eight prelim fights on Sunday will stream on Facebook.

Leading the prelims will be a middleweight bout between C.B. Dollaway and Jared Hamman that was ticketed for the main card until a recent demotion to the undercard. The previous four UFC cards on Versus have featured just four fights on the main card instead of the typical five. In addition, the prelims get a bantamweight bout between former champion Eddie Wineland and former title challenger Joseph Benavidez.

Other prelims include Ed Herman vs. Kyle Noke at middleweight; a light heavyweight bout between Karlos Vemola and promotional newcomer Ronny Markes; a featherweight bout between Alex Caceres and short-notice newcomer Jim Hettes; lightweight fights between Cole Miller-T.J. O'Brien and Jacob Volkmann-Danny Castillo; and a bantamweight fight between Edwin Figueroa and Jason Reinhardt.

To gain access to the fights, which will begin at 5:45 p.m. Eastern, viewers must "like" the UFC on Facebook. As of Tuesday afternoon, the UFC had more than 6.1 million fans at the site.

The UFC began streaming preliminary fights in January with its Fight for the Troops 2 show at Fort Hood, Texas. Since then, the promotion has included free Facebook fights for each event, regardless of the main card's platform – be it on pay-per-view, Spike or Versus. For the historic UFC 129 card in Toronto in April, five prelims were aired on Facebook, followed by a pair on Spike leading into the pay-per-view – meaning for the first time, fans were guaranteed the opportunity to see each fight on the card. That has continued for each of the seven events since then, including Sunday's card in Milwaukee.

The main card will air live on the Versus cable station at 9 p.m. Eastern on Sunday. Once again, the fight card will be preceded by a live pre-fight show on Versus featuring Craig Hummer, UFC light heavyweight Stephan Bonnar and Ariel Helwani. In addition, the trio will also host a post-fight show on Versus.

UFC on Versus 5 is the third of four shows on the 2011 calendar between the promotion and cable channel. All four will be UFC debuts in a new market. In March, UFC on Versus 3 was in Louisville, Ky.; in June, UFC on Versus 4 was in Pittsburgh, Pa.; and in October, UFC on Versus 6 will be in Washington, D.C.