Will Exciting Victory at UFC 133 Make a Difference to Rashad Evans' Haters? 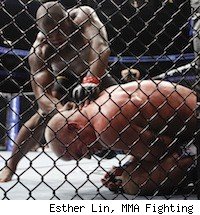 You can call Rashad Evans cocky. You can call him brash. But after Saturday night, at least for a little while, you can't call him boring.

In a fight that admittedly seemed like it was his to lose at UFC 133, Evans put on an impressive performance, demolishing Tito Ortiz for a second-round TKO win. The fight was everything that Evans' detractors (and there are many) would have us believe he's totally incapable of, which is to say it was exciting to watch and it didn't go the distance.

What I wonder now is, will any of that make a difference to the fans who despise him?

I realize I'm in the minority here, but I don't understand all the hate for Evans. Sure, some of his fights aren't so thrilling, but you could say the same about Georges St. Pierre and Randy Couture, yet they both have large, passionate followings. Against Ortiz, Evans finished a guy who hadn't been put away since 2006. Shouldn't that count for something?

As for the people who claim he's cocky, here's a nugget of info that will blow your mind: every fighter is cocky. To varying degrees, maybe, but if you get in the cage and fight for a living, you have to have at least a little bit of a swagger. Some guys hide it better than others, but they all have a fairly high opinion of themselves, as they should.

Evans is a guy who has been fighting the top light heavyweights for years, and he's only lost once in his entire career. Doesn't that warrant at least a little cockiness?

But for most of the Evans haters, I suspect it's not really about his fighting style or his attitude. They hate him because they hate him. Their minds are mind up, their opinions already formed, and there's not a lot he can do to change that at this point.

That's not necessarily a bad thing, either. Because of the nature of fight promotion, it helps to have villains as well as heroes. People love having someone to hate, and the most ardent Evans haters are probably least likely to ever miss one of his fights. Whether people are tuning in to see you win or to see you get beat up, all that matters is that they're watching.

Will some of those people eventually come around on Evans, the way some have on Ortiz lately? Maybe, but I wouldn't hold my breath. For now, Evans is a marked man. It doesn't seem to matter to people that, in person, he's actually a thoughtful, likable guy.

That's because they're not hating Rashad Evans -- they're hating a version of him. Maybe it's the version they know from snatches of TV sound bytes, or maybe it's a version they made up in their own heads. It hardly matters at this point, since they're not open to any new information on the subject.

There's really not much Evans can do about it, other than work with it and keep stacking up the wins. A few more performances like the one he put on against Ortiz, and even those who hate him will have to respect him.