Vitor Belfort Wants Title Shot, but Sonnen-Stann Winner Likely to Get It 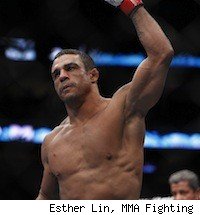 PHILADELPHIA -- For most of this week, Vitor Belfort has been telling anyone with a recorder, microphone or camera that it is still his goal and plan to win the UFC middleweight championship. After knocking out Yoshihiro Akiyama in the first round of their UFC 133 bout, Belfort reiterated his desire to fight for the belt again.

But Belfort is going to have some waiting and winning to do before he gets that chance again.

After UFC 133 was over, UFC president Dana White said that UFC 136's bout between Chael Sonnen and Brian Stann was most likely going to determine the man to face the Anderson Silva vs. Yushin Okami winner.

"I think it should be," White said when asked if Sonnen-Stann would be a No. 1 contenders fight.

That means there is at least a possibility of a rematch of the Silva-Sonnen fight that captivated fans in August of 2010.

Belfort (20-9) was fighting for the first time since his UFC 126 loss to Silva, a defeat that came as the result of a front kick. Ironically, Akiyama tried the kick against Belfort, too, but to drastically different results. He missed, and Belfort seemed to be angered by the move, rushing ahead and landing several hard strikes that grounded Akiyama before he finished with punches from the top.

It took less than two minutes.

"I knew if he were to throw that kick, this would happen to him," Belfort said. "He knows that [too].

Belfort said coming off his loss to Silva, his body was "aching" to fight again, and he took out his frustrations on Akiyama.

Except Dana White and matchmaker Joe Silva. At least for now, Belfort will have to wait a little longer, and fight a little more to get back to the place he hopes to return to.